May this find you well and in hopeful spirits, my Dear Sillies.

Back onto Dude Three (no, not like that. Not yet anyway) - We sat side by side, eating party munchies and listening to lively, live music at a friend’s gathering. There was a tension between us, a good one. I could sense Dude’s nervousness. And when I tripped over nothing onto concrete, as we walked to thank the party host, I sensed my own tension. Then again, that maneuver wasn’t atypical. Just more embarrassing than usual - first date and all.
“At least you fell gracefully,” Three said, grabbing the baking dish I’d clung onto.
Oy vey. “Nah, not at all graceful, but thanks for saying that.”

And now, a Greek scene, in honor of Birgit. Birgit's sassy wit never fails to make me laugh hysterically. And her movie trivia is fabulously fun.
My question for you, Birgit and everyone: What movie is this setting from? I took the photo on the Greek isle of Crete.  Let's see who guesses correctly first. 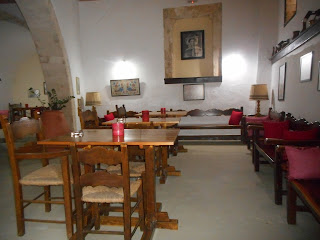 Dear Sillies,
I'm sorry that Martha had to once again ruin an otherwise hot post. Gotta give the ole gal credit, though; she does rock bladder leak underwear.
As many of us in the US ready our tummies for hedonistic indulgence, and then some more, may you/we all feel deeply grateful for more than we can articulate.
You, my dear loyals, are a blessing in my life.
I'm very grateful for you.
A thankful season to all! 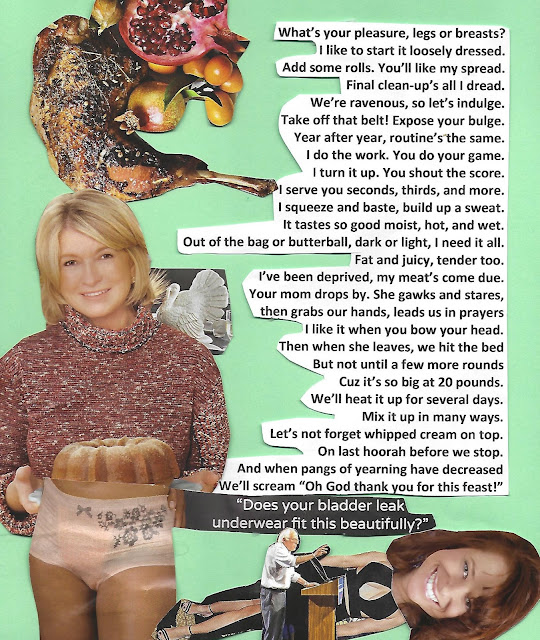 Love you. Not you, Martha.
I love you, Dear Sillies. And my Bernie.


He’s already two minutes late! A knock at the door interrupted my prelude to despair.
“I was on the wrong street,” Dude Three explained, a bit frazzled.
“No worries. Yeah, it’s confusing. It’s a broken street, and a cul de sac. We’re fine.”
---
Streams of sunlight warmed my back and head, as Three led me to a peaceful, secluded spot along Bidwell Creek.  He’d brought a hearty assortment of snacks (Havarti cheese, pepperoni and sandwich meats, a Pale Ale for himself, bottled water for me). Three rested a large tan beach towel on the grass, and confessional began.
“I want to explain. So I’m sorry again about not following up after we met. Liz and I used to go to Lake Almanor all the time, so I was in a funk about stuff. But when I saw you at the concert, I was thinking 'I really had fun with her.' Robyn--” he pointed at his arm--“I wear my heart here. I’m faithful, I’m a good guy. That wasn't like me.”
I couldn’t help but start (or keep) falling. I think it’s that innocent childlike vulnerability. I can relate; I never matured beyond it, I guess. Or is it the nurturer in me who wants to soothe and comfort? Oy. Dunno. I know that we were both comfortable and attracted from the start.
“I do need to say,” I began, “when you dissed me to go sell baseball cards on EBay, I gotta tell you, Three, that’s not good for a woman’s ego.”
He laughed.
I smiled. “Look, I won’t let you forget about it. But"--I imparted an elbow nudge--"I’ll give you a free pass, since you manned up and we’re here. You've used your only free pass.”
“Challenge accepted,” he grinned.
Three explained about his admittedly nerdy baseball card hobby. He told me about his two grown (young adult) children. Things were a bit touchy with the younger one, though he spoke like a proud, loving father.
“Okay,"--my turn--"respect is key."
“I agree. Friendship first, and I need to earn your trust.”
I liked that he realized this. “And monogamy.”
“One love." Three raised an index finger. "Yes! One love!"
I told Three about Pizza Delivery Boy and Paul E., both of whom were anti-monogamy.  Oh, and the married man who tried to kiss me at a party. And, no. I shut-up, else I'd continue forever.
--
There was no romance (not yet anyway).
I'd invited him to a house concert after our picnic, so we went back to my place in-between things.  (I know, sorry. It's a real story, though, so it shall continue).
~~~~~~~
Now for a tribute to the one and only Jono. In addition to being a very intelligent, worldly, warmhearted man, Jono's become a dear friend. We've shared snippets about Judaism. Thus, this picture outside of a  synagogue in Greece is for you, Jono. Unfortunately, I couldn't go inside. We were there during the High Holidays (Jewish New Year). 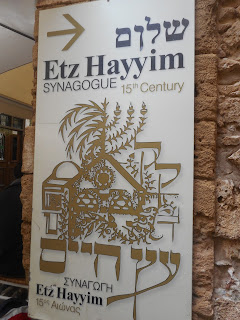 Have a safe and relaxing weekend, my Dear Sillies.

I'm at a Grecian airport in this photo. A book that's been providing cozy, delightful comfort these days, I Love You / Now Go Away, was also a big hit among my travel buddies. They took photos and/or jotted down the title. This one's a jewel, my friends. Dawn Weber, national-award-winning humorist, and my friend at Lighten Up, wrote it on her Smartphone. The whole book! Written on a Smartphone! That takes more smarts and savvy than I'll ever have. It's a hearty, human and hysterical quick read that'll keep you laughing throughout. (This recommendation is completely unsolicited, needless to say. Read it and you'll be grateful, needless to say.) 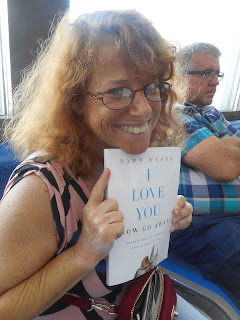 A recap: Dude Three had explained and apologized for his previous case of cold feet. He'd been trying to get over an ex, he told me. Yeah, whatever. Dude, man up or leave me alone. (Right?) Chicken sh*titude does not intrigue me. But that cute smile of his - sigh.

Then came a message a few days later: "I'm wondering if sometime this weekend you'd like to go for a picnic at Bidwell? I think that would be fun."

He did it! I felt a strong urge to provide immediate, positive reinforcement. Plus, relative to the other chicken sh*ts I'd been meeting, this one was clearly a winner and a champ. Did I mention my weakness for a man with a charming smile?  I was also drawn in by his apparent honesty mixed with a dash of vulnerability.

"Why yes, I'll gladly accept the invite," I responded.

We proceeded to make plans.

Let's hear it for the boy! Would he be my Romeo? My lovin' one man show? You've gotta understand. Oh, oh, oh, oh...Sorry. To be continued.


Be well, my friends.
Take care of yourselves, and have a good week.

Posted by Rawknrobyn.blogspot.com 41 comments
Email ThisBlogThis!Share to TwitterShare to FacebookShare to Pinterest
Labels: celibacy and suburbia, chicken shit or Romeo?, dating, footloose, love, on why I choose celibacy, reasons for celibacy

Me and Dude Three

Dear Sillies,
Today (Nov 6th) is the last day of my ebook giveaway here. Feel free to download, since it's free.
Onto other matters, besides my trip to Greece, friends, I kept another secret from you.
It's a dude story. Remember when I wrote a Memo to the Men I'm Not Dating? [September 12th post.]
My story starts by giving you the back story to my summary story of Dude 3 below:
Dude 3, DO NOT have a cute, endearing smile and tell her how much you want to see her, after telling her you’re not ready for a relationship, and after dissing her to go sell baseball cards on EBay. Don’t take for granted that she’ll wait for you to man up, or that she wants to hang out in the friend-zone. Go for a grand slam, if you earn her trust back first, or don’t play at all. Don’t do it, dude.


Three and I met on a group camping trip, July 4th weekend. An innocent crush simmered, while we watched fireworks sprinkle the night skies over Lake Almanor. I slept happily after a sweet, brief kiss. Alas, I couldn't find Three the next morning. He'd darted in fear, I figured. I know the routine--the unmanly chicken dance. But I arrived home to a message: "I had to leave early, stuff to do...I've gotta go sell baseball cards on EBay." I was more amused than hurt.

Months, and Dudes 1, 2, and 4 later, I happened to see Three at a concert in the city plaza. "Come over here," he said, with outstretched arms. Three hugged me, imparting a "Hi sweetie." (Damn him.) It was nice and a bit awkward. Given I'd been dissed for baseball card negotiations, I went back to my original spot on the dance floor, and proceeded to have a fun night alone.
At home, this message awaited: "It was great seeing you. Sorry I left early the weekend we met. I want to explain, I wasn't ready to let you into my life because of someone else on my mind. I hope you understand. I enjoyed spending time with you quite a bit."
While very much endeared by his honesty, I thought: Dude, man up or not!
"We're all scared," I told him. "Thank you for being honest. It's a refreshing change. I didn't think it was personal, but it's nice to hear. I really appreciate it."
"No, never personal. I was just being chicken sh*t." 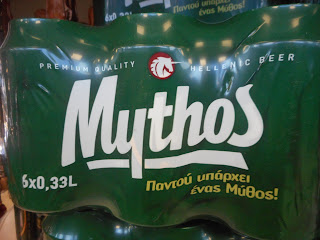 For Bryan, in celebration of your birthday week! Greek beer, and lots of it! 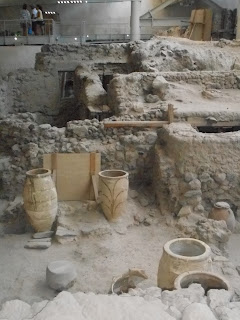 For Pat Tillet, who's always showing us hidden treasures. This is Akrotiri, where a Greek (or Minoan or "Pre-Greek") civilization flourished until volcanic destruction in approximately 1700 BC. There are layers of cities underneath it too. Most everything found was intact, as is. Incredible, right? 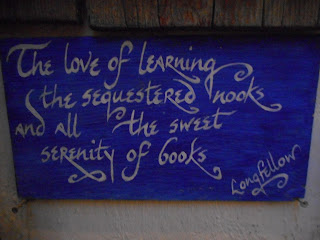 Geo, this gem is for you, our poetic bloggy gem.

Near the entrance of Atlantis Books in Oia, on the isle of Santorini.

Be well, my dears.
Have a good November, and a good, safe week.
Love to you.