It's about time I sampled some more chocolate for you, dear sillies.
So I tried this Hammond's Pigs 'N Taters Milk Chocolate Bar.
Note to self: Read label before making purchase. 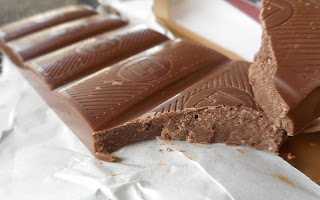 Remember those little red-dye "bacon" bits that we used to add to salads? [I wrote that in past tense, because I'm hopeful none of you still add "bacon" bits to your salads. I admit, I used to eat them by the handful as a kid.] They were a big deal in the 70s -- even before SPAM gained raging popularity.

Well, the "Pigs" here refers to bacon bits. Had I read the label, I'd have realized this. But when it comes to chocolate, I'm not thoughtful. See the little red bits in this bar? Yep, "bacon" bits. And the "taters"? I'm not sure. Sodium and stuff I can't pronounce.

So did I finish it? Of course, and in record time. I thought it was pretty good, actually, though I'm disappointed at the false advertising. Keep in mind that I'm not picky about chocolate. It tasted like salty chocolate with bacon bits. The chocolate itself was pretty yummy. 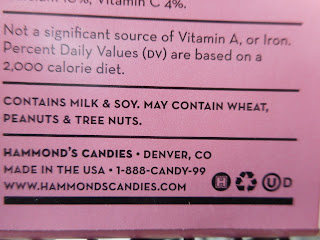 Hey look, it's Kosher!! Note: the encircled U means it's Kosher. While there's something kinda wrong with a kosher chocolate bar that's called "Pigs whatever," you can recycle the label! Mazel Tov!

Mr. Robio Dante's review on Amazon is much more entertaining than mine. Here's an excerpt:

ByRobio Dante on December 30, 2015
"First, if you're thinking of buying this for someone because they love bacon or because they love funky chocolate bars, STOP. You will not maintain friendships this way.
Miss Piggy has more actual pork in her DNA than this bar..."
There you have it. Avoid this one, or don't blame me or Mr. Robio Dante. Thanks Robio!
Take care of yourselves, my friends, and have a good week.

I hope that life is going easy on you.

I had such an exciting weekend. I try not to be too intrusive when I see someone famous, yet I couldn't help but snap pictures... 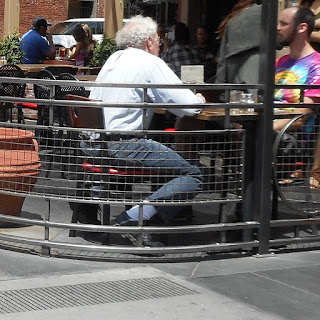 In case you can't tell, it's (obviously) Bernie Sanders! Right? It has to be. That hair, those nice tight fitting jeans, and he's chatting with a Deadhead millennial at Burgers 'n Brew in downtown Chico! How cool is that? I was too busy snapping photos to get a hug or autograph, but I'm still so excited, I wanted to share this with you.

I may be a bit obsessed. I promise, though, if I see any other politicians around town, I'll photograph them too - even though nobody compares to Bernie Sanders.

Keep a smile, and have a great week, my friends.

Verging on Paradise, My Book's Conclusion

An author isn't supposed to publicize anything from the final chapters of their book. That's another stupid rule I'm happy to break. I routinely find myself needing to re-read the end of Woman on the Verge of Paradise. Here's part of that closing letter to my readers. I kinda like it (and need to remind myself of this) a lot. I hope it has meaning for you too.

Have a good week, and take care of yourselves.


...It’s not about landing at a destination. It’s about looking towards one, while savoring each gesture along the path. Like exhilarating foreplay that might or might not lead to orgasm; or the tantalizing first bite of bubbling hot fudge smothered over a creamy, mushy banana split sundae, whether or not you proceed to eat the whole thing (and if you don’t, I will.). Or sinking into a potentially life-altering moment of profound enlightenment, wherever it may lead. It’s about belief in greater things, whether or not they come to pass in your lifetime.

Ultimately, it’s a space built upon one ingredient: self-love. This is where hope is at its most real and life, its most generous. Wherein faith conquers an infinite expanse of unknowns. In this glorious intersect of space, time, and energy, resides the verge.
And on the other side: Paradise.
Thank you for traveling along with me.
Love,
Robyn

Posted by Rawknrobyn.blogspot.com 61 comments
Email ThisBlogThis!Share to TwitterShare to FacebookShare to Pinterest
Labels: Woman on the Verge of Paradise

Mr. BJ gave me a side-hug. "Good to meet you," he grinned. "I just went in for a minute, and that place is really loud and crowded. I'm wondering if you want to go somewhere else?"

Duh. That place is party-central for drunken college kids. He just realized it's loud? "Sure, I'm not a fan. What else is around here? I'm easy."

As we sat in the semi-crowded, semi-loud restaurant waiting for our food, conversation was forced. By this I mean, I was the only one skilled in basic discourse - as he focused on his phone, showed me pictures of himself and his brother, and was generally odd.

"So, what does BJ really stand for?" I couldn't let it go.

With pride and confidence, he blurted out: "blow job!" Mr BJ proceeded to work himself up into a laughing frenzy.

Mr BJ readily asked her, "What does BJ stand for?"

The waitress glanced at me sympathetically. "Well that's awkward," she said.

"It really is," I agreed. "And on a first (and last) date too. I don't know what menu he's looking at, but that won't be served tonight."

He kept giggling. Really, dude? You're like old and graying and a grandpa and you think you're like the next Jay Leno.

Needless to say, Mr. BJ did not get a BJ that night. Though a follow-up text from him said something about thunderstorms, I had no response. I have no desire to engage in thunderous BJs or talk thereof with Mr. BJ.

Posted by Rawknrobyn.blogspot.com 50 comments
Email ThisBlogThis!Share to TwitterShare to FacebookShare to Pinterest
Labels: misadventures in on-line dating, on-line dating, reasons for celibacy, the B.J. on a first date

My Dear Sillies,
I hope May treats you gently.
Now that you've been so tolerant of all my A-Z madness, I'm hoping this sight won't be so bad. I know, it's a bit tacky. But only a bit. I think he's cute, and so does Martha. So here's Neil Patrick Harris in his tighty whiteys with some May Pole Erotica (a re-post from last year). 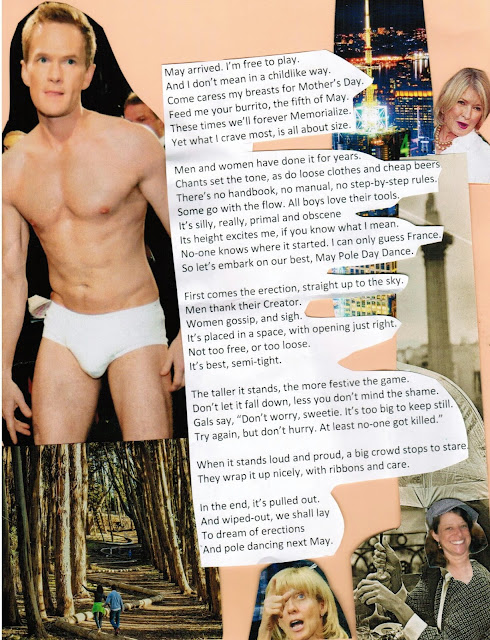 Keep smiling.
Chocolate kisses to you.