Dear Sillies,
I'm cheating. I've been getting over a bug and have nothing new for you. Instead, I decided to see what I posted exactly one year ago. I'm pleased that my eyes met this sweet, inspiring post. It feels like a dose of what I and maybe you and the world needs now.
I highlighted the bits that bring the post to date.
Be good to yourselves.
You're loved.

Eighty four days since the Camp Fire [now 449 days], strength, unity, and resilience continue to pervade. It's a beautiful thing! At the heart of it all: children--our most unsung heroes.
I visit(ed) a local elementary school weekly, for work. That one school seamlessly integrated a former Paradise elementary school. And I mean, seamlessly. 2 schools in 1! With almost no time to prepare for the expansion, the kids and staff readily posted murals and artistic creations to warmly welcome their new peers.

While playing tetherball, a girl approached to say "I'm in first grade." I believe her point was that she's in first grade and nearly my height, but she was too polite to go there. Note: She is now in second grade an undoubtedly taller than me.
Other kids who noticed my lack of tetherball savvy suggested that I hit the ball harder. (I tried. I really did. I still lost, 15 games to 0 games.)
By the way, did you know that a "cheap shot" amounts to one's opponent hitting the other's body with the ball, the result of which is that the person hit by the ball is out!? Perhaps dodge-ball is a less vicious option.

Excuse me, while I leave to ice on my rope burns.They're gone now!
Be well, my friends.

"There are heroes all around us doing ordinary things in extraordinary ways." 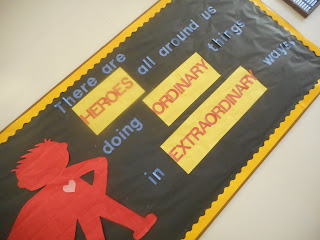 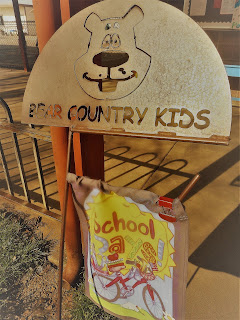 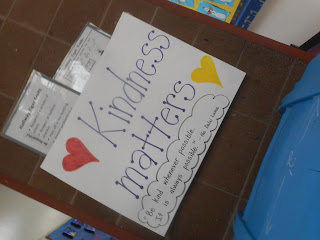 If only Hollywood knew that not everyone can and should write. Put those gold studded pens down, people. Leave the writing to us lowly types. We got this.
So yeah, I've some books you must avoid - some reviews, some personal snark, lots of well wishes.

Her mispronunciation of "exacerbated" as "exasperated" is only one of the recording's unintentionally uproarious howlers. McCormick has embraced the wretched excesses of cigarettes, alcohol and drugs...that is, until she meets Jesus. And I mean she literally meets him. McCormick describes a very real and physical encounter with the Son of God, whom she says knocked her to the ground and then helped her back up off the sidewalk Did she get up saying "My nose! My nose! My nose! Oh, . . . It's YOU. You're sooo dreamy!"To that, He responded, "Sorry, girlfriend. I was watching your show and something suddenly came up."?

Inside Out: A Memoir by Demi Moore


I am sick to the core that you chose to share such private and personal information about your relationship with Ashton. Completely inappropriate.She needed better advice on what to include and a ghostwriter (No pun intended.)
Yet the pun's brilliant.

Who am I to diss one of the world's most phenomenal artists? I'm Me. And he's Me, and so he went and wrote a book called Me. It almost brings crocodile tears to my eyes. I told my wife he went on for fifty pages about his early years and she said, "What, did he describe how he was toilet trained?" Yes. Yes he did.


Be good to yourselves.
Love you, my Sillies.

Posted by Rawknrobyn.blogspot.com 42 comments
Email ThisBlogThis!Share to TwitterShare to FacebookShare to Pinterest
Labels: Demi Moore, ego is all it takes to publish, Elton - creative book title Elton said nobody ever, Full House, Jodie Sweetin, Marcia fails again, not yet over Ashton?


Dear Sillies,
She smiles bravely for the cameras. She sports a new, peppy, Canadian sky-blue hat and dress-suit designed by William is My Everything, Inc.
Yet in an earth-shattering move, her beloved Prince Harry and his beautiful new wife Meghan, with their precious baby unfortunately named "Archie," abandoned her Majesty to pursue life in the beautiful great North that is Canada.

Is Queen Elizabeth truly honey nut cheerios amid this shocking news, or are her royal granny panties in a grand bunch royally? Life by Chocolate has the story!

First -- Robyn rolls out the world's biggest English apple fruit roll-up, which spans the length of the stage -- Let's rise to welcome the oldest, most longstanding Queen, the old one who's been standing since she took Sir Loin for her last ride (and perhaps vice versa) many a fortnight ago, Queen Elizabeth II!

93 year old Queen Elizabeth struts methodically across the fruit roll-up, her 98 year old sleep-walking husband by her side. They stop in front of Robyn, center stage. Prince Philip drops sluggishly onto the stage floor.

Robyn Oh my, is that guy okay?
Queen Elizabeth Who knows? Frankly, who cares? Ta-ta, my Philly beefsteak. It was long and sometimes hard. Well, not quite long. Not real hard either. She smirks.
Robyn I hear ya. The long, hard combo. Few are so lucky. Back to you, Lizzy. You're most important. Robyn flashes a cheesy smile at the Queen and then at the camera. I just love Harry and Meghan for breaking free! I'm all about hashtag "Go Megs and Harry," you know?!
Queen Elizabeth's face reddens. She glares at Robyn and pushes up her middle finger as if to adjust her hat. My William are Kate are magnificent!
Robyn Not really. William's bald. He had plenty of hair until, wait. Did you cause it? Don't answer that. Robyn looks directly at the camera. Shout out to Prince William: Rogaine!
Queen Elizabeth looks perplexed.
Robyn enunciates and pushes her fists in a rowing manner along her side -- "row" and then, Robyn cups her boobies and bounces them up and down (which she appears to really enjoy doing) -- "gain."  Row-gain!
Queen Elizabeth I know what it is, certainly. Philly needed it for his nether regions some time ago. However, are all Americans quite as rude as you?
Robyn thinks for a moment. Yep. She belches, unplanned too.  We're rude. Stupid too. We dunno this booze-wahzee biz. Is that where Hillary started a war or somethin? We hate imperial margarine sh*t. But Harry and Meghan. Love 'em! Archie, though--unfortunate name. Surely it's easy to change your name in Canada. God bless Trudeau. I mean, what a hottie! Right? And let's be real, one can hardly change their name, much less their Depends, in your--
Queen Elizabeth appears aghast. She shouts Up! Prince Charles jumps up and escorts her sheepishly, sleepishly off the stage.
Robyn What can I say, people? God bless Canada! Hashtag "Go Harry and Megs but for the grace of God change your baby's name," and today's show is sponsored by Rogaine. Grow new, thick hair within weeks. Weeks! Robyn winks. 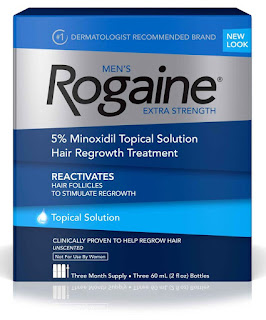 Posted by Rawknrobyn.blogspot.com 32 comments
Email ThisBlogThis!Share to TwitterShare to FacebookShare to Pinterest
Labels: Megan and Harry break free and she pretends to be happy about this, Rogaine, Tell all interview with Queen Elizabeth! She rides like no other, William needs a hairpiece

The Latest in Chocolate: Chocolate Hummus

My Dear Sillies,
Some combinations should never have been combined. Like chocolate and chick peas. But I had to try Trader Joe's Chocolate Hummus for you, my friends. For you. 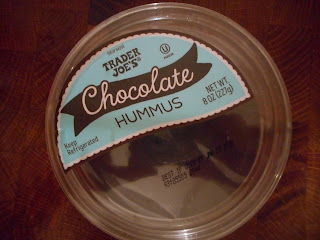 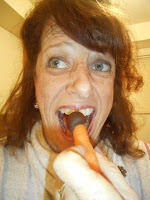 It's a healthy form of chocolate, especially when used as carrot dip. Hummus is for veggies. Right? No. It's wrong. It's fine on bread or by the spoonful. The chocolate has a rich, salty (not sweet) flavor, kinda like Nutella for vegan, gluten free, diabetic Spin instructors. I can also taste the chick peas, but it's altogether wrong. Don't do it, folks. This one should not have happened.

Let me know what you think.
Take good care this week and always.

Posted by Rawknrobyn.blogspot.com 2 comments
Email ThisBlogThis!Share to TwitterShare to FacebookShare to Pinterest
Labels: latest in chocolate, Trader Joe's - I still and always will love you., vegan gluten free diabetic Spin instructors - this is for you!
Newer Posts Older Posts Home
Subscribe to: Posts (Atom)