Woman on the Verge of Paradise: A Cockatiel, Trapeze Swing and Hot Wax


Shit.  I’m giving myself the “What the hell did I do him - er, that - for?” speech before anything’s even happened. Sinful thoughts run amok, enticing my hormones to get all riled up and stupid. Yet I was doing so well with this seemingly eternal celibacy thing. A strong, independent woman, my brain ruled the way and I was achieving my goals. Damn that weirdo for taking me off course.
As I’ve mentioned, the chemistry between us is explosive until Mr. Salsa* talks. The man’s lingo continues to leave me in a primal state of bewildered arousal. Last week while salsa dancing, he paused to wrap his arm around my waist and proudly introduce me to a friend:
“This is Robyn. She’s going to be my new wife.”
“I think not, but where’s the ring?”
“We’ll go to McDonald’s, for onion rings.” He humored himself, and only himself, with his (lack of) wit.
Still, my hormones and hunger led the way as I joined him for a bite to eat after class at, um, his place. The eatery was closed, likely per his plan. After finishing some carne asada, Mr. Salsa walked me into his garage to display a few things.

First, he introduced me to his cockatiel, then an Amazon parrot, and, finally, an Asian love bird.
“How you doing? How you doing?” They kept repeating, as he kissed their beaks. I felt at once intrigued and nauseous.
Then Mr. Salsa pointed out his fitness swing-trapeze apparatus.  He plopped on it, whirled upside down,  then in a backbend pose.
Hm, okay. I see you’re flexible.
The grand finale included a hot wax treatment. “Do you like hot wax?”
“Say what?” The question’s unfamiliar to me.
“Hot wax. Watch.” He dipped his left hand into a huge vat of hot wax. “It’s good for cuts. See…” He pulled his then zombie-like hand up and proceeded to strip a layer of hot wax off his fingers, one by one.
The door opened behind us and his roommate, clearly half-asleep, stuck his head in. We both gave him a casual "hello" and I took the cue. “I’m sure it’s good stuff. I should get going now.”


To his credit, Mr. Salsa did not dip any part of me into hot wax nor did he pull me onto his trapeze.  To my credit, I didn’t touch his cockatiel. Well, actually, I did. But just a little on the head. That was it, and he took me back to my car shortly thereafter. With a hug and a kiss on the cheek, I trekked home with my celibacy intact, my brain frazzled.
Since then, though, Mr. Salsa invited me over for a “stake” dinner. “I have the house to myself,” he added. We know what this means, right? Yeah, he planned to burn me at the stake with hot wax and nobody would witness this but his exotic birds. What good are they except to ask “How you doing?” like a fowl Joey Tribiana? So, astute as I am, I declined in favor of dinner again after class tonight.
Crap. I’ve gotta move. It’s time to get dressed.
------
*I can’t figure out how to insert the tilde over the “n” in Senor. Thus I’m stuck with “Mr.” Salsa.

It's exciting to celebrate bloggers' successes. My dynamo friend Terra, aka Campbell Lawson, recently published not one, not two, but three children's books: Whereditgo, Rock n Friend, and Somebody.
Here they are: 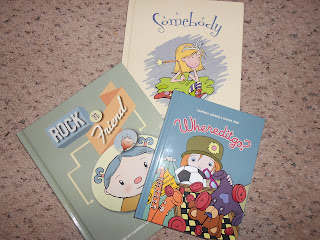 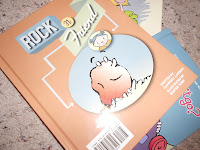 the other side to the story

Terra's playfulness with words mixes with warmhearted messages that left me smiling. (My nephew's going to be thrilled with this Chanukah package.) The themes are relevant to all children: not being able to find something, feeling unimportant, and longing for a pet. Buster York adds colorful, detailed and fun illustrations.

In Rock n Friend, halfway through the book we read "There are two sides to every story." Flip the book over, and a new story begins from the second main character's perspective. This uniquely creative two-for-one will be given to the winner of my giveaway. I'm hoping and assuming you have at least one young child in your life. To win, you need not tweet, click a "thumbs-up" icon, alter your facebook status, vlog yourself doing back-flips in the snow, or even follow me (or Life by Chocolate). Just leave a comment below telling me who you'd give the book to.  I'll chose the winner at random. Terra/Campbell Lawson will send an autographed copy to the recipient.
Terra wrote these books in her grand mothers' honor; Campbell and Lawson are their maiden names.


The three will be available on Amazon in January, 2012 and can be found now at www.campbelllawson.com
You can also visit Terra at www.sittingonanoak.com.
Good luck and have a playful week!

Posted by Rawknrobyn.blogspot.com 18 comments
Email ThisBlogThis!Share to TwitterShare to FacebookShare to Pinterest


CHOICE FOOD
Welcome to Quick Fry.
We fry it up quick.
See our fourteen page menu
And give us your pick.
The crowd’s growing hungry
So please don’t delay.
Did I mention our specials change three times a day?
And if you like fries
We’ve got orange, blue or green
Blackened or raw, fluffy or lean
Shaped in a C, swirly O or plain L.
What font do you favor, Batang or Corbel?
What size would you like, puny or fat?
So what will it be?
Would you like fries with that?