Dear Sillies,
Among my most embarrassing of guilty pleasures, I indulge in Keeping Up With The Kardashians. I know. I can't believe it either, nor can I devise an acceptable excuse.
But don't worry too much about me. I don't have a TV or means to truly Keep Up, except when I'm at the gym. So I do burn calories while getting sucked into their botox'd scandalous infidelity, relentlessly tireless procreation, billionaire divatude drama.
The show's winding down next year. Phew. But whether we like it or not, we won't hear the end of the K dynasty.
They've birthed 10 kids during the show, and they've undergone *383 botox treatments.  [*I made this number up. It's likely way off. Khloe alone appears to have 259 treatments on each lip. Am I right? In one show, she said "Lips aren't permanent. You do you."]
Anyway, they're not the most brilliant family, but they do entertain. Here are some Kardashian quotes, plus Engel retorts:
“I’m going to sew up my vagina.” -Kris Jenner

Too late, sweetie. Far too late.

Oh, Khloe, you used to be my fave. But then you snagged another basketball star, this one in a committed relationship with a woman 8-months pregnant and apparently, a huge hoop.

I know, right, Kourt? You just became my fave.

I think you missed the boat on “new math,” darlin’.

“You know what they say, dress your best when you go to bed because you don’t know who you’ll see in your dreams.” -Kendall Jenner

Who says that, honey? I sleep naked, and Idris best be naked too.

“I never thought I’d be in a family that has more people than a small country.” Scott Disick

I never thought I’d watch a small country reproduce itself to the size of Australia for ten seasons.

“I liberate minds with my music. That’s more important than liberating a few people from apartheid or whatever.” Kanye 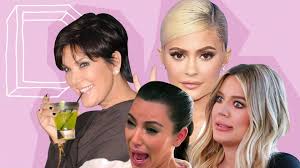 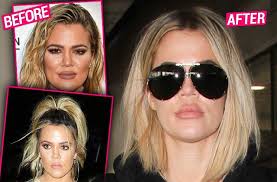 Do you ever watch? Who's your fave? Please somebody, admit to it.

Love you, my friends.

Posted by Rawknrobyn.blogspot.com 24 comments
Email ThisBlogThis!Share to TwitterShare to FacebookShare to Pinterest
Labels: guilty pleasure, How can we miss them if they won't go away?, Kardashian brilliance, KUWTK

In its 212 year history, Ruth Bader Ginsbug was the second woman to serve on the U.S. Supreme Court. The first, Sandra Day O'Connor (who retired from the bench--who knew you could do that?).

As we know, RBG fought cancer until she lost that fight last Friday at age 87.

I won't try to summarize what RBG did for justice, law, women's rights, and the rights of people who are marginalized. It's a tremendous amount. I didn't realize what a hero she was, until now. (I often don't learn about people's influence until after their passing).

We've lost too much. It's our turn to carry the torch.

“Women will have achieved true equality when men share with them the responsibility of bringing up the next generation.” RBG

“People ask me sometimes… ‘When will there be enough women on the court?’ And my answer is: ‘When there are nine.’” RBG 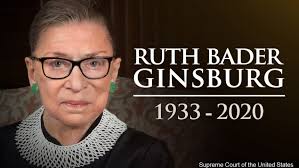 Please be well, my friends, and know that you are worthy.

Dear Sillies,
This Friday eve marks a New Year for the Jewish people. If you feel old, consider this: We're embarking on the our 5,781st birthday bash! I know. Oy vey.
Because a fresh start is as imminent as it is welcome, I invite you to celebrate Rosh Hashanah* too.

Let's work towards a more peaceful, safe, and kind year across the globe.
Shana Tova! (Hebrew for "Happy New Year.")

We wish you many moments of sweetness in the year ahead, along with greatly improved peace throughout the world. 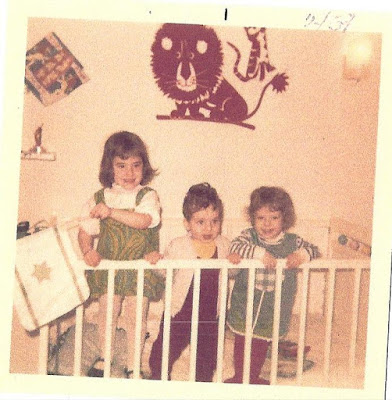 Posted by Rawknrobyn.blogspot.com 19 comments
Email ThisBlogThis!Share to TwitterShare to FacebookShare to Pinterest

Striking a Pose for Labor! 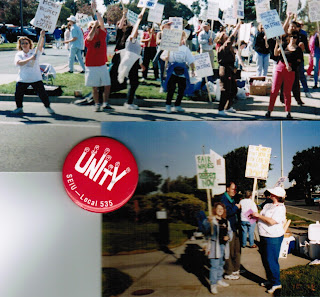 That’s me on the left of each photo. I was a hell-raiser back in 1998...and once since then. Wink. I helped organize this strike, was a union steward, published a chapter newsletter, and participated in contract negotiations. During one shining moment of said negotiations, the CEO interrupted me, and I abruptly asserted, "I don't appreciate being interrupted." She bit her lower lip. Victory!
In the process, our Field Representative introduced me to California's current and still very handsome Governor Gavin Newsom. (Newsom's ex wife, Kimberly Guilfoyle, is with Donald Trump Jr. now. As in, they recently purchased a house together. How weird is that? I mean, of course, our Governor is staunchly liberal).
Anyway, we were flying high, until we caved two days later. But we had a blast, and the CEO was impeached by her own peers a few years later.
Shout-out to laborers everywhere. I remain grateful to workers who gave their lives for the cause of an 8 hour day and 40 hour work week.
California's migrant farm workers are owed our biggest debt of gratitude.
Happy Labor Day.
A good new week to you.
I love you, my Sillies.

Posted by Rawknrobyn.blogspot.com 25 comments
Email ThisBlogThis!Share to TwitterShare to FacebookShare to Pinterest
Labels: I was once a rebel, Labor Day, Strike, thank you to the migrant farmers who sustain us but get treated terribly. we love you.
Newer Posts Older Posts Home
Subscribe to: Posts (Atom)