Presidential Erotica: The Rising of the Caucus

I hope this finds you in good health and spirits.

How about those caucuses? While I tend to avoid blogging about controversial subjects, my passions got the best of me. I couldn't help but unleash this baby. Plus, when I posted it on facebook, it evoked prayer from my D.R. (decent Redneck) friend, Chris Martin. He commented "Dear Lord..." Sorry, Chris. Keep praying. Furthermore, a certain female candidate got a bit cocky after the South Carolina caucus. So here we go. May all this caucus talk bring smiles and other pleasant sensations. 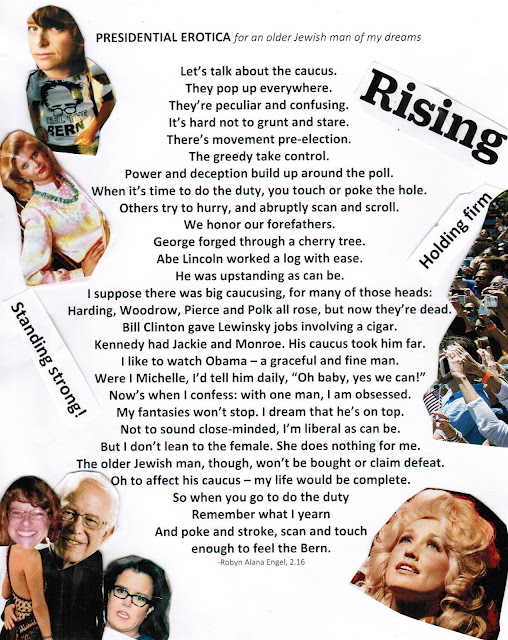 Have a good week and stay silly!

Sloths and Misadventures in On-line Dating

It was a wonderful break. I hadn't done on-line dating for several years. After five years in Chico, though, I believe I've met and either dated or ruled-out every eligible bachelor in town. All two of them. So I caved, despite fierce attempts to talk myself out of it. Loneliness wreaks havoc. While I've come to believe that loneliness is simply an aspect of being human, and while I KNOW I'm better off alone than in a toxic relationship (and every romantic relationship I've been in has had its share of toxicity), I need the writing material. Or so I told myself. Thus for your sake, I set up a profile last week on a popular dating site. Oy gevalt! What have I done?  ~~~~~~~~~~~~~~~~~~~~~~~~~~~~~~~~~~~~~~~~~~~~~~~~~~

In attempt to weed out those whose conversational skills would abruptly cure the most stubborn cases of insomnia, I included this statement: "I laugh and smile readily, unless I'm utterly bored because, for example, the date I'm sitting with at a coffee shop describes in excruciating detail a day in the life of a South American sloth in mid-winter. Not that there's anything wrong with being a South American sloth in mid-winter; I'm simply not interested in hearing  about it."


I thought Einstein had died long ago. It seems I was wrong. He's alive and well and responding to dating ads. In fact, he sent me this:
"I am reaching out to you because my sloth breeding business is going really well. I need help with the sloths!! Have you ever milked a sloth it can be dangerous."
After a moment in WTF?-land, I eagerly offered advice: "From my experience, the hardest part about milking a sloth is getting high enough on the tree to grasp their utters.* After that, it flows smoothly. I'm glad your business is booming, though the world doesn't need more sloths."

We ignored Al's fly and found a three-sided coin in order to fairly determine the winner. Al Penwasser, Elizabeth Seckman, and Janie Junebug fought a spirited battle for the title. They were even seen sharing spirits.

"Quit backwashing, Al. I hate sloppy seconds!" Janie shouted.
Elizabeth politely declined, stating, "No thank you. I never drink." She then snuck backstage for a shot of vodka.
Al suddenly ran into the restroom. Our crew tried to open the door to see if he was okay, but it was locked. Hm, strange.

Alas, we decided to end the madness by counting ballots. But we needed to first discard all of Janie Junebug's repeat votes. Our high-security team deciphered these because a set of ballots had this statement written across the back: "I did not have sexual relations with that woman, Janie Junebug, in exchange for a vote." Hm, strange.

And the winner of a very sweet package is...

4) Janie Junebug FOR THIS HEARTFELT SENTIMENT:
Fuck everybody.
Love,
Janie

Congratulations, Janie! Even minus your illegal shenanigans, you won!
Thanks to all of the candidates and voters. You have proven yourselves among the silliest of the most silly.


A great, sweet week, my dear silly friends.
Thanks for the laughter.  This one was a doozy.

The cast and crew of Life by Chocolate love your love-hate. Citizens came* from far and wide to cast their write-in comments and votes. We need another day or so to analyze the competition.

I'm highly disturbed to say that Al Penwasser's entry had some *unidentified fluids that need be run through airport security. Janie Junebug's numerous identities, added to a few seemingly legitimate voters she'd clearly done personal (i.e., sexual) favors for, but whose names aren't listed on our travel roster, confused us even more. While Elizabeth Seckman imparts a clear, clean, wise message, the race is too tight to call.

Tune in tomorrow (Or Tuesday. Sorry. We're really confused and need some more time to toss a coin) at Life by Chocolate for the polling results.

Elsie Amata
I think someone needs to write a poem to Cam Newton. He was a grumpy cat last night:

Poor Cam you got sacked
in the process your shoulder looked jacked
I'm sorry that your team got beat
and you walked off the field in defeat
at least your team made it to the big game
my team, the Giants didn't, how very lame
no Super Bowl ring for your Valentine this year
only chocolates, flowers, and some salty tears
maybe this will humble your arrogant ass
remember this too shall pass


Cheryl
OK, I was shooting for a limerick but most of my poetry just gets long winded. Here is my thought..Valentine’s Day Bust

He sat on his chair, immersed in despair
As he pondered the path of his life.
It didn’t seem fair, being only one in a pair
when all his buddies had acquired a wife.

But then he heard ‘her”, though her speech was a slur “Honey, would you buy me a beer?
His vision quite hazey, am maybe it’s crazy,
But he said “Let’s get out of here.”

WELL…He awoke in a bed with a pain in his head
The events of the night but a blur
He looked to the right to a troubling sight.
The parts he saw weren’t a “her”.

Yep, not to be crude but the babe was a dude.
This isn’t quite what he thought it should be.
He might of got laid, but mistakes had been made.
His dream women was clearly a “he.

So if you are in a bar and your drunker too far
for choosing your companion for life
If you’re wanting a chick make sure there’s no d…
Well…Depending on what you want in a wife.


VOTE FOR YOUR FAVORITE HUMOROUS VALENTINE’S HATE.
Polls will close at midnight on Saturday, 2/13.
WINNER WILL RECEIVE A VERY SWEET PACKAGE.
(Please excuse weird extra column of numbers. Due to budget cuts, our studio recycled ballots from Florida. Thank you.)
1    1)  fishducky
You love me.
I love me.
Isn't it nice that we have something in common?

2    2)  Elephant's Child
Surrounded by men who believe that they could get knotted, this Valentines Day I may take up macrame.

Al Penwasser, #5-7
5    5)  Roses are red
Violets are blue
Me with no skivvies?
PU
6   6) A Valentine Haiku
(Assuming 'chocolate' has only two syllables, instead of three. I mean, what kinda freak says, 'Choc-o-lates'?)
Dozen red roses
Box of milk and dark chocolates
Just me and my hand


7   7) As Valentines approaches
I wonder what I'll see.
Probably stern reproaches.
Because the only one who comes?
Is me.

9    9) Elsie Amata  Poor Cam you got sacked
in the process your shoulder looked jacked
I'm sorry that your team got beat
and you walked off the field in defeat
at least your team made it to the big game
my team, the Giants didn't, how very lame
no Super Bowl ring for  …See last post to read the end of this one. I’ve cut it at 50 words. Rules and all. Poor Cam.
1    10) Jono It's meant for Martha.
Good Riddance Valentine

Oh, how I hate thee so
You’re like a dung beetle
In clean white snow
Your voice sets me a wailin’
With a shriek like Sarah Palin
With hatred I get my fill
From your breath of old roadkill
And with this final word
I flush thee like a turd

11) Pat Hatt On this loving day
I'm sorry but we're through
With myself I'd rather play
While I search for someone new
Some advice you have earned,
So here it is in full
Your skin would not be burned,
If you hadn't rode that bull.

Some are stressed,
trying to prove their love,
to pass some unwritten test.
Those who are alone are made to feel
that their lives are somehow less.
Don't bring me any roses,
no heart-shaped chocolates or jewels.
Valentine’s Day is nothing but
a made-up day for fools.

Anti-Valentine's Giveaway! Enter early, often, and by this Weds! 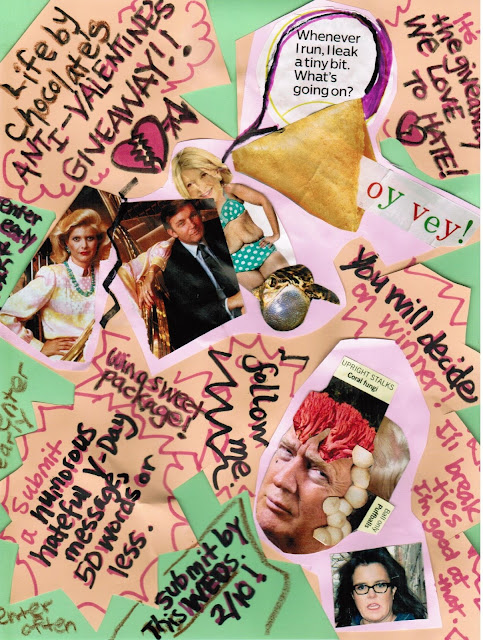 I hope this finds you well and not a saddened Panthers fan.

If so, this should cheer you: Enter Life by Chocolate's ANTI-VALENTINE'S DAY GIVEAWAY! Submit early. Submit often, but deadline is this Wednesday, 2/10, 12 midnight.

Rules:
Follow Life by Chocolate. Create a funny hateful Valentine's message in up to 50 words. Post as a comment or, if you'd rather, email me at Rawknrobyn@aol.com.
I've received some wonderfully hilarious entries already.

I'll put all of your contributions up for a vote before week's end. You will vote. I will make the deciding vote, if needed. The winner will receive a very sweet package in the mail.