During the writer's retreat in Big Sur (see past posts), Author Pam Houston facilitated a list-writing exercise. My end product went on and on and on, and further. So I've scaled it down to the worst 13. Enjoy.
Thirteen Ways in Which Male Suitors Failed to Endear Me:

We haven't seen DuPont in a while. I finally paid a visit. Still dressed for July 4th? I'm not sure. 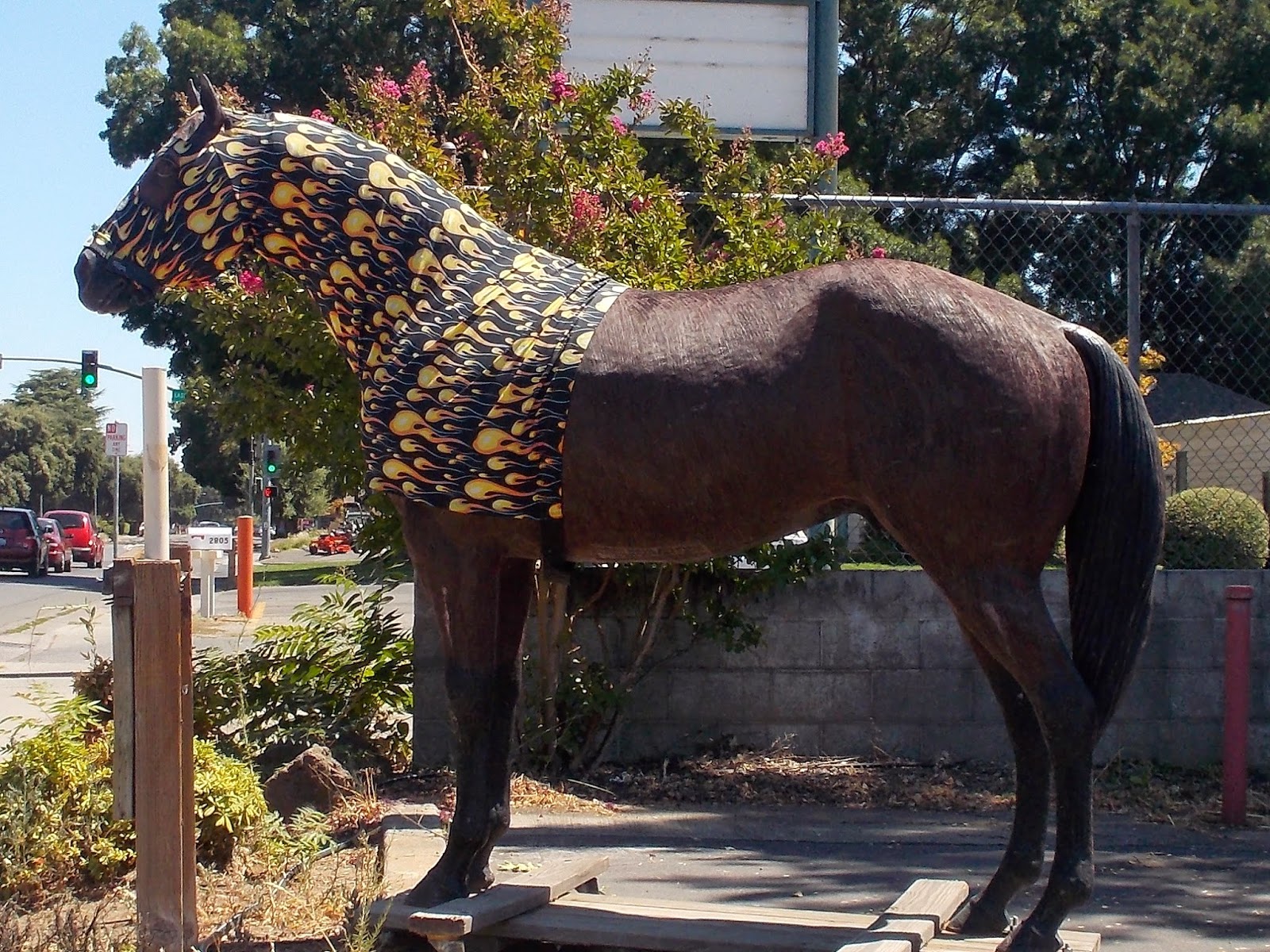 Have a great week, as July turns into August.

Posted by Rawknrobyn.blogspot.com 53 comments
Email ThisBlogThis!Share to TwitterShare to FacebookShare to Pinterest
Labels: dating, DuPont, epistles and my crotch, my ex and shrimp 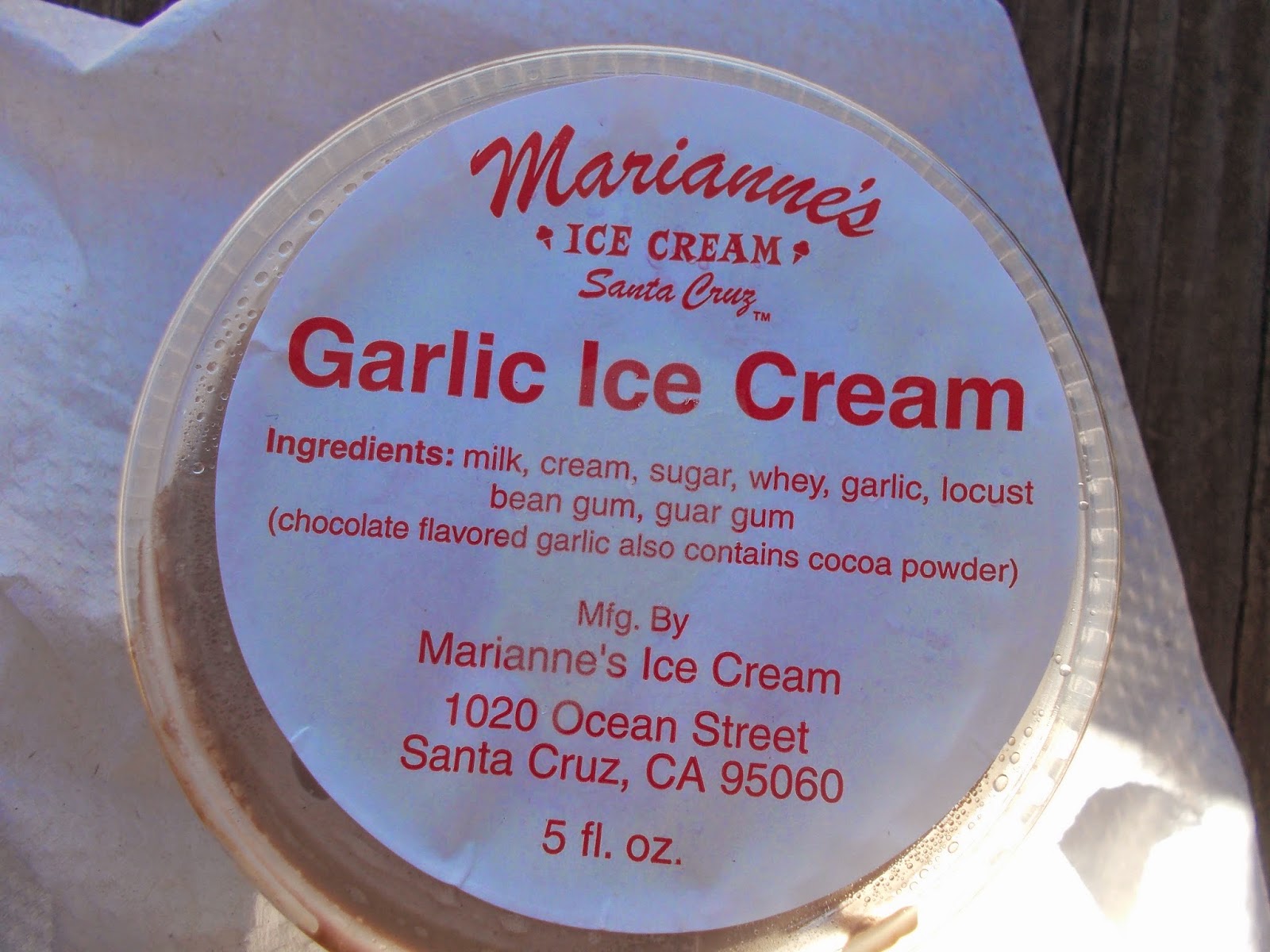 On my way home from Big Sur, I stopped in Gilroy, a small city known for its over-abundance of garlic and annual Garlic Festival. There, I stretched, inhaled whiffs of humid garlic infused air, and sampled Marianne's Chocolate Garlic Ice Cream.

Wishing to enjoy my ice cream, I denied the fact that locust bean gum follows garlic on the listed ingredients. Something about locust bean gum doesn't sound very appetizing. Must be the word locust: one of the 10 plagues visited upon the Hebrews when my people fought for our freedom from Egyptian bondage. So I tossed the lid in a trashcan, pretended I hadn't studied it, perched myself on an outdoor picnic table, watched cars zip by, and tasted my cup of Marianne's Chocolate Garlic Ice Cream.

I wasn't thrilled. I was "meh." I suspect it's not the locust bean gum that killed it for me, though that didn't help. This ice cream is just too garlic-y for my taste. I like garlic, but I had to struggle to taste the chocolate. Where chocolate's concerned, I do not want a struggle. In short, this marriage of flavors should head for divorce court. I can't recommend it.

For the novelty factor, and for you (so that I could warn you to steer clear), it was worth a try. I'll give Marianne's Garlic Chocolate Ice Cream a 4 on a 1-10 scale.

Ever been to Gilroy or the Gilroy Garlic Festival?
Ever tried garlic ice cream? Would you?
What's your take on locust bean gum?

Have a great, locust-free new week!

As promised, here's more on my writer's conference at Esalen in Big Sur.* Cheryl Strayed, our lead presenter, shared tidbits on the upcoming movie Wild, based on her novel. Her story captures Cheryl's emotional journey as she undertakes an 1,100 mile hike across the Pacific Crest Trail.
*I couldn't afford this retreat but did it anyway. I say this because I hate the filthy rich and don't want you to think of me that way. By "filthy," I mean people who advertise their material wealth. Anyway...


What do you think?
Ever taken an 1,100 mile hike? Yeah me neither.
Have you read Wild? Do you plan to see the movie?
Actually, I wasn't a Reese fan until now. It appears to me this may be her best performance yet.

Mystery Box of Awesomeness from the Awesome Duo at A Beer for the Shower!

Brandon Meyers and Bryan Pedas of A Beer for the Shower, the duo that defines awesomeness through their every deed and creation, held a contest. I entered this artwork plus $1.32. It's all I could afford as bribery. It worked! I'd also read and reviewed Graveyard Shift and Demetri, exceptional books; their others top my "purchase and read stat" list. Anyway, I WON a Mystery Box of Awesomeness! 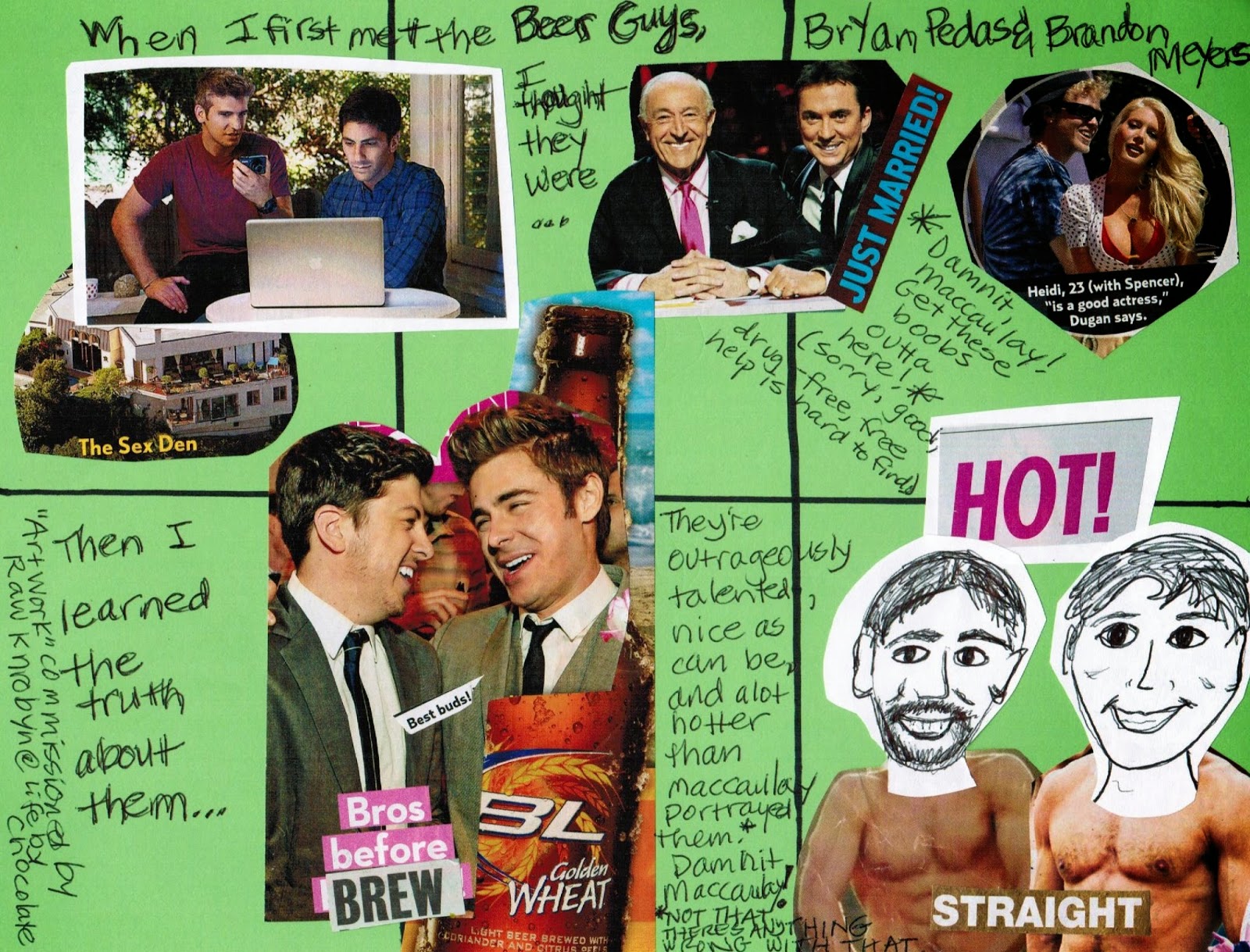 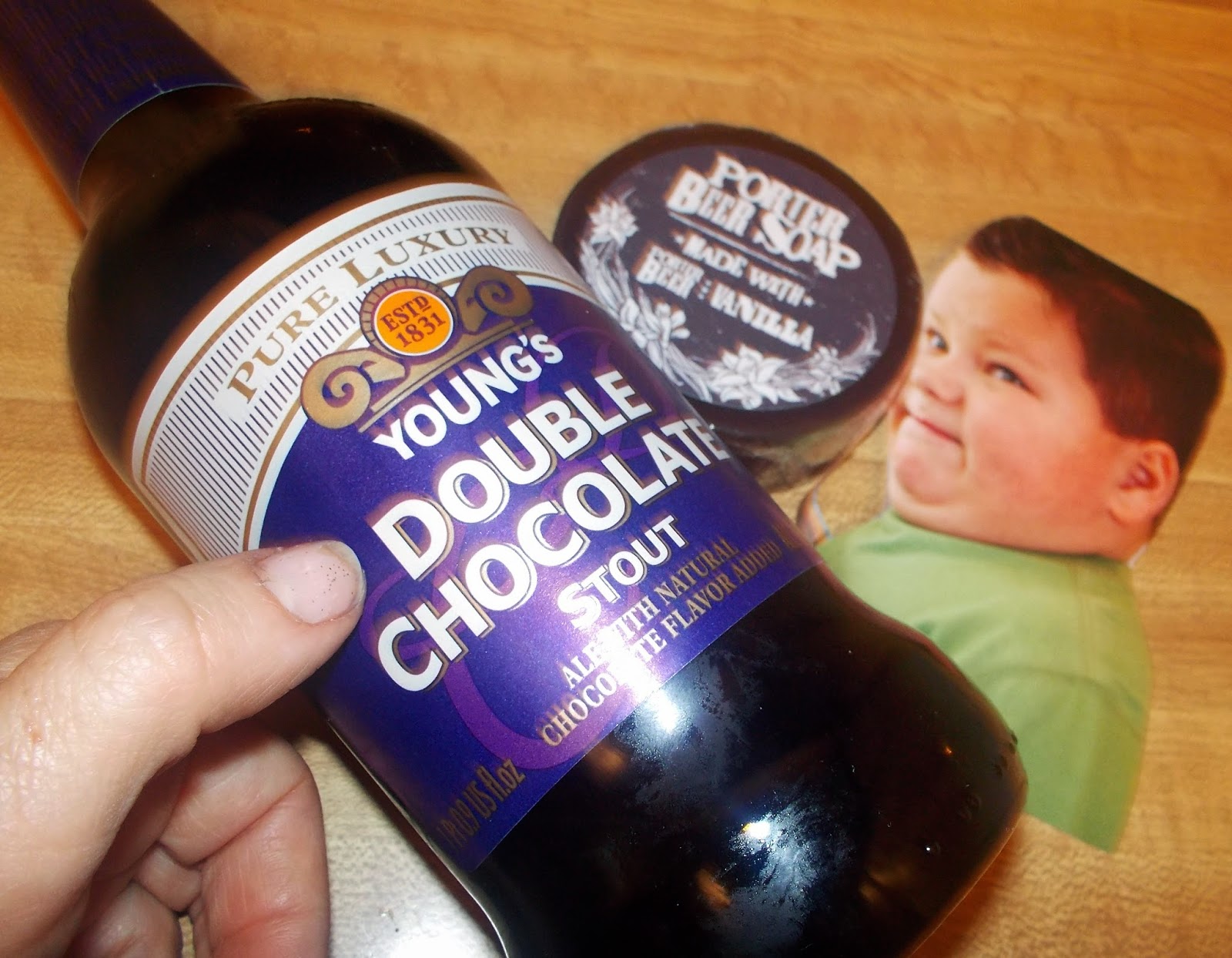 Stay tuned for a review of Young's Double Chocolate Stout!

Next, a computer link sent me to this awesome graphic. Their business card at the bottom had the link on its back. 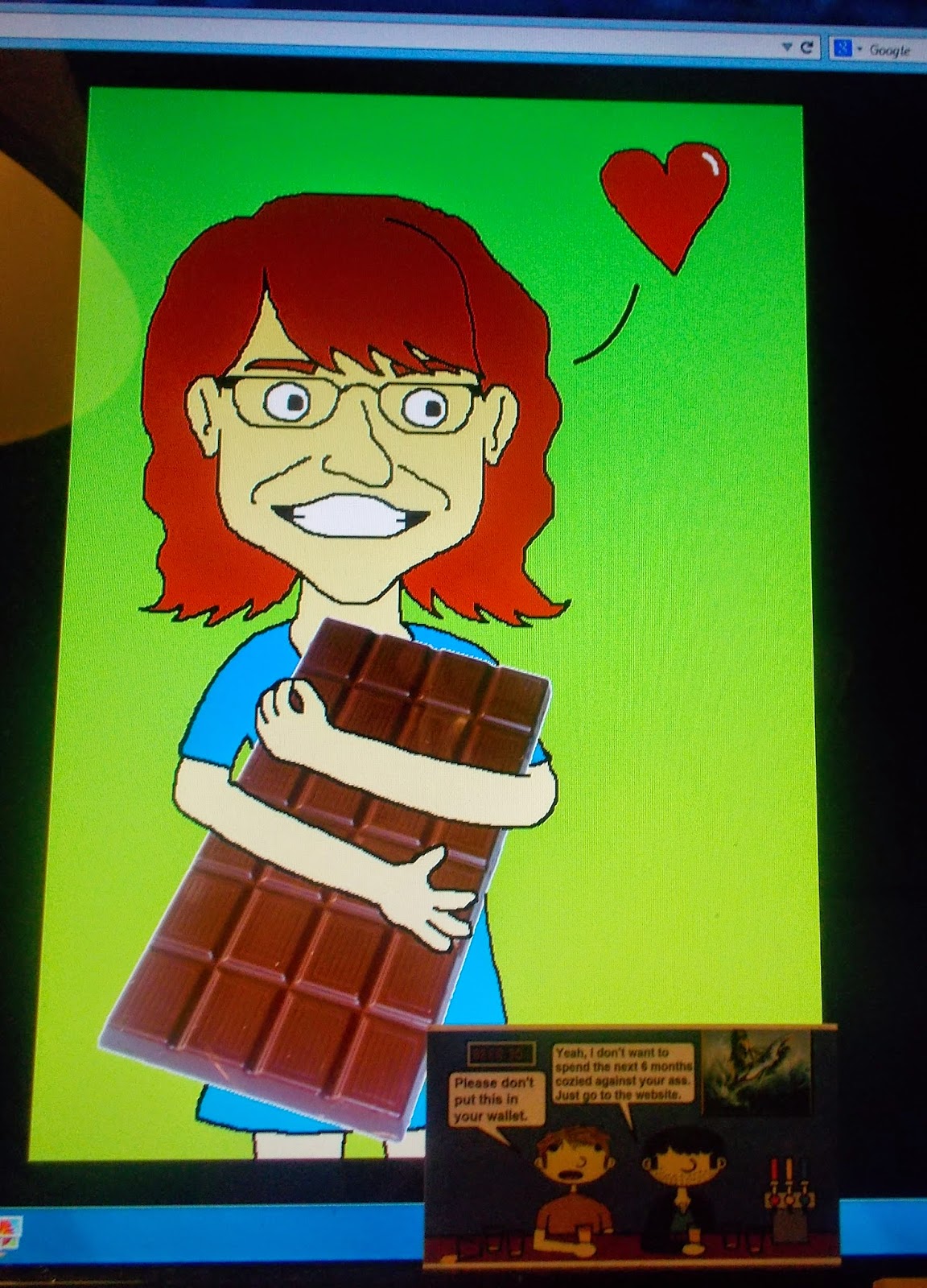 I'm an ecstatic winner of B&B's Mystery Box, packed very thoughtfully with awesomeness to its full extent.
Thank you guys! You have my love and admiration, always. 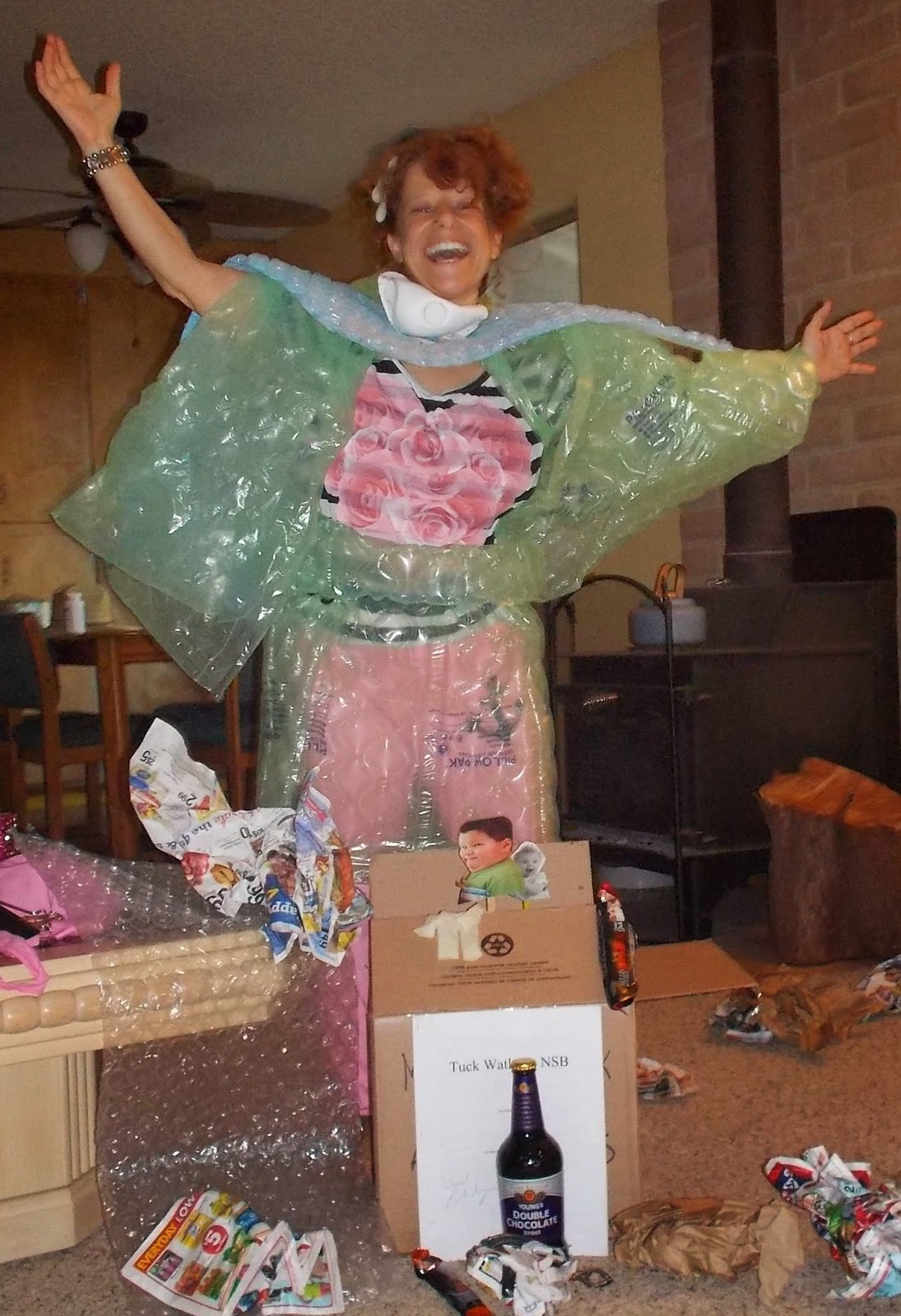 *Also, thanks to the fine folks at Wittmeier Collision Center in Chico for donating all the colorful bubble wrap for this venture, and to my roommate for the expert photography and costume assistance.
Lastly, if you're jealous, forward $1.32 to B&B, and better luck next time.
Happy Friday and have a peaceful weekend, everyone.

Woman on the Verge of Paradise, Robbie and Robyn


The pro authors at my writer's conference said that, when asked when their current project will be published, their standard response is "in a year." Their point: it takes years to publish a good book,  much longer than we anticipate. Don't publish before it's ready. Otherwise, you're doing yourself a disservice. That said, here's an early scene from my novel, Woman on the Verge of Paradise. I've begun editing, and it'll be published in a year. Smiles.
~~~~~~~~~~~~
I could never relate to boys in a way that felt anything but weird. I was usually too shy to even say “hi” to them. On occasion, though, a (very) random guy paid attention to me.
There was Robbie, for example, who used to visit the library whenever I did library service as an elective. He was a lanky kid who donned thick-framed glasses and resembled a White Steve Urkel. Robbie strolled into Orville Wright Junior High's library on a regular basis, to talk to me. It was his “free period,” he said.
I had no interest in him, but Robbie's attention flattered me. When I told Susan about him, she suggested I give Robbie a chance. “Robyn, he really likes you. He seems like a nice guy,” she goaded.
Easy for you to say, I thought. You got one who doesn’t pull his pants up above his belly button.
One day Robbie stood really close, leaned in to supposedly look at the title of a book I was stacking to be shelved, and “accidentally” touched his hand to mine.
“Wow, your skin is super soft, Robyn.”
Robbie’s gentle touch felt sweet, as did the compliment. “Thanks,” I said softly, slightly blushing.
“Robyn?”
“Yeah?” I hid my giddiness, awaiting the question. Was he going to ask for a date? Tell me he’d been in love with me since he first set eyes on me? Ask me the all-important question of the day: “Will you go with me?”[1]
He quickly turned his head from side to side, as if to assure nobody was around.
I scanned our immediate vicinity too. Nobody in sight. It was just me and Robbie. Robbie and Robyn, all alone at the front desk of Orville Wright Junior High School’s library. Nobody else existed.
Robbie moved in closer, preparing to ask the question. “Robyn...do you have fifty cents I can borrow for a soda? I’ll pay you back next week.”
And so it went. My spectacularly unromantic romantic life. My open-hearted, tenacious, klutzy quest for love and self-worth. My story: the anti-fairytale.

[1] I think this meant “Will you date me?”I'm not sure, though. Nobody ever asked me to "go" with them without adding a destination. Did any of you hear or use this term back in the day?

Posted by Rawknrobyn.blogspot.com 33 comments
Email ThisBlogThis!Share to TwitterShare to FacebookShare to Pinterest
Labels: anti-fairy tale, CA, los angeles, Orville Wright Junior High in Westchester, steve urkel, the beginning of the end of my hot sex life, Woman on the Verge of Paradise

I'm back, dear friends. I'm happy to return to blogland, though sad to have ended my summer getaway. I don't know how to summarize the past week. It was phenomenal. I'll likely do a series of posts, starting with snapshots of my destination: Big Sur, CA. 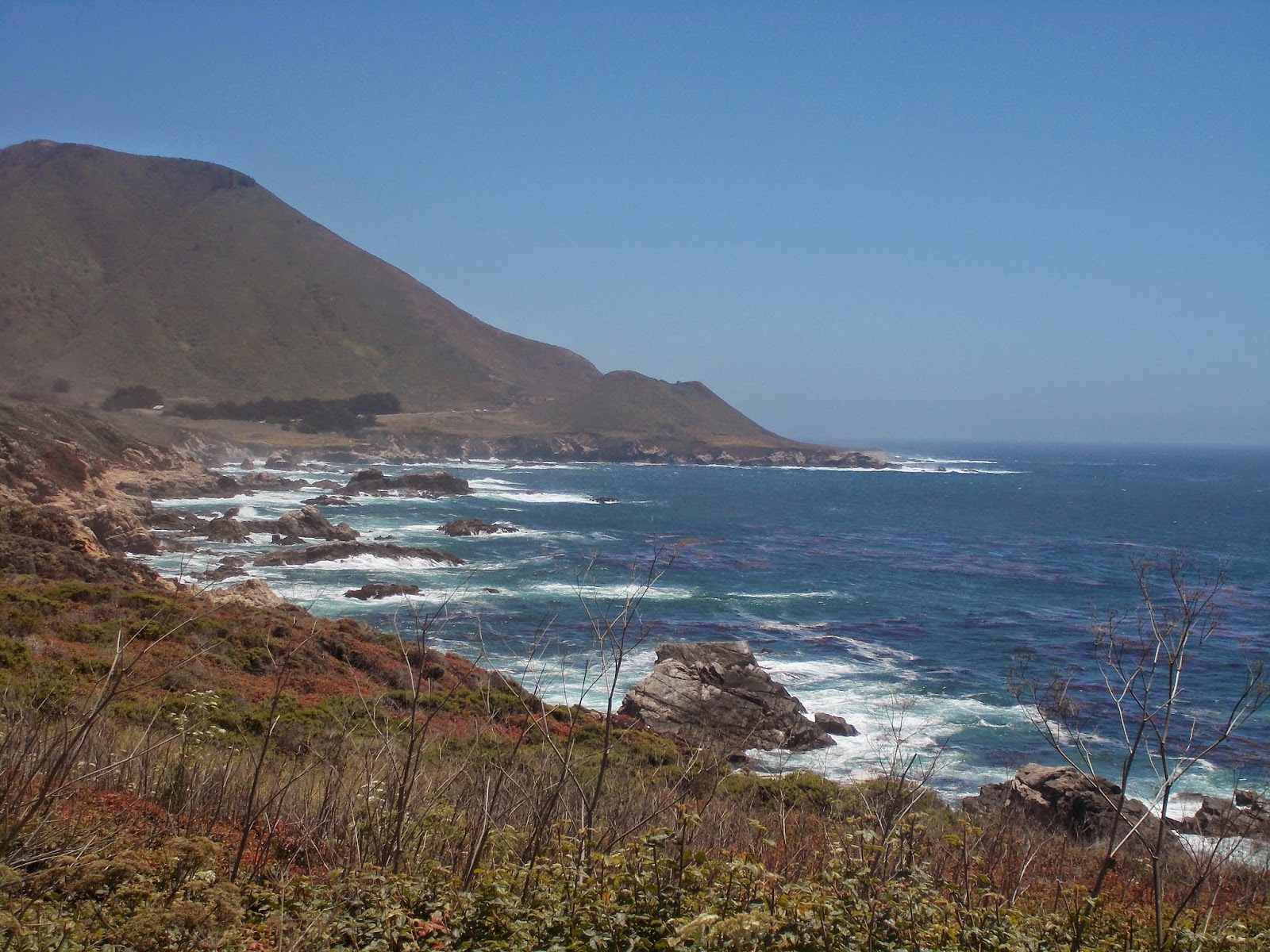 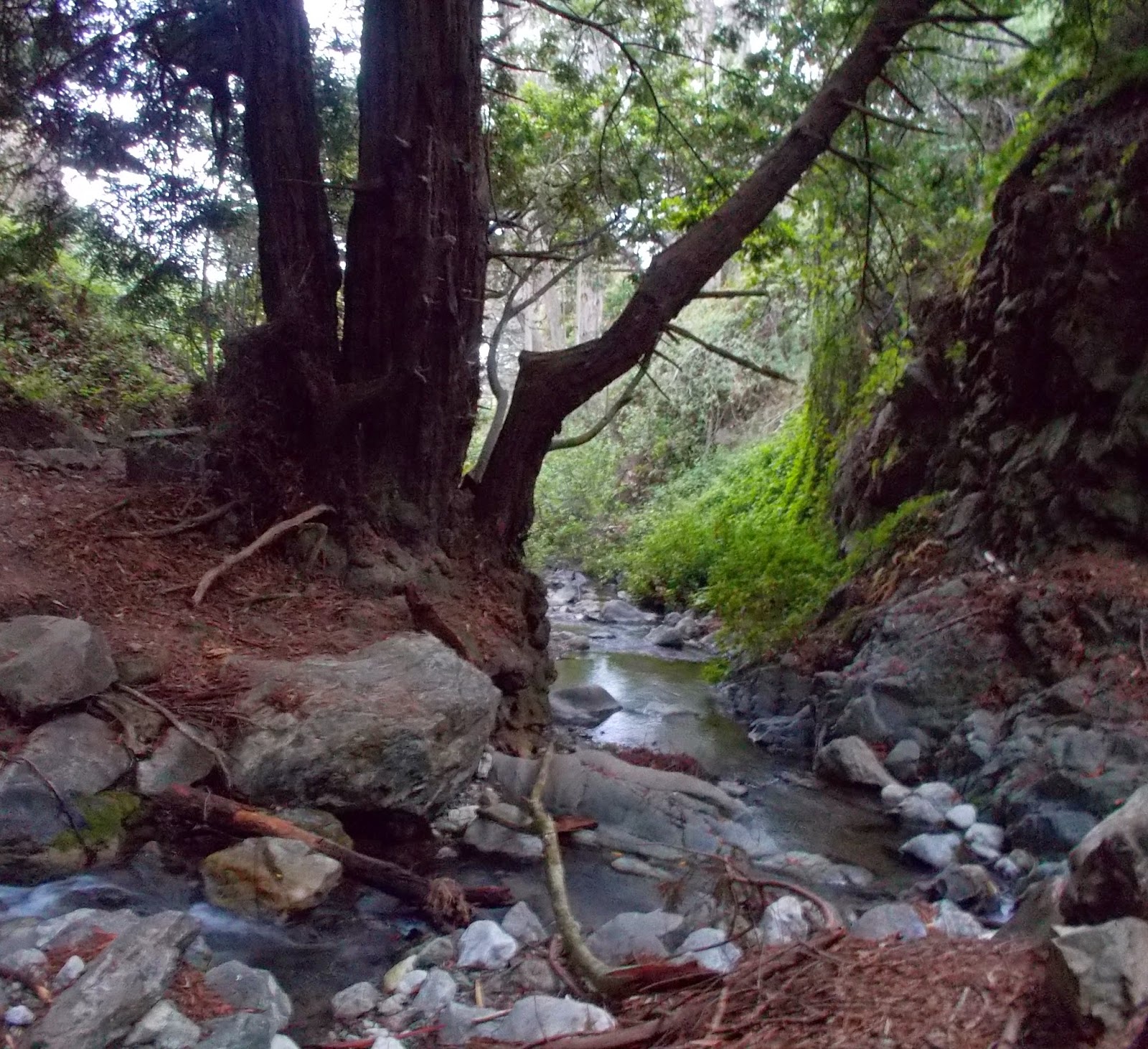 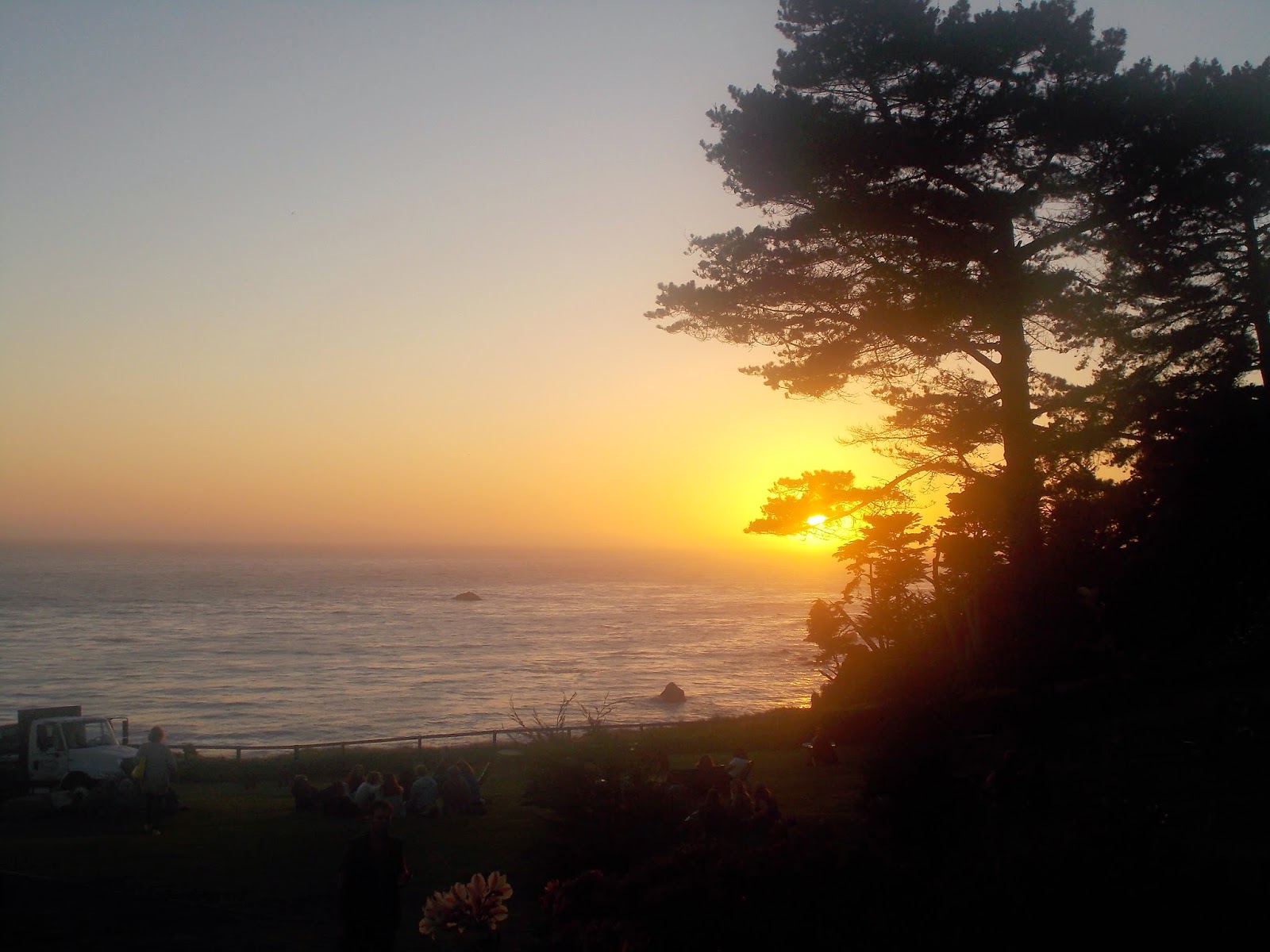 There, I attended a writing workshop at Esalen retreat center. The workshop was led by a favorite author of mine, and much of the world, Cheryl Strayed.
Cheryl was kind enough to hunch down for this shot. 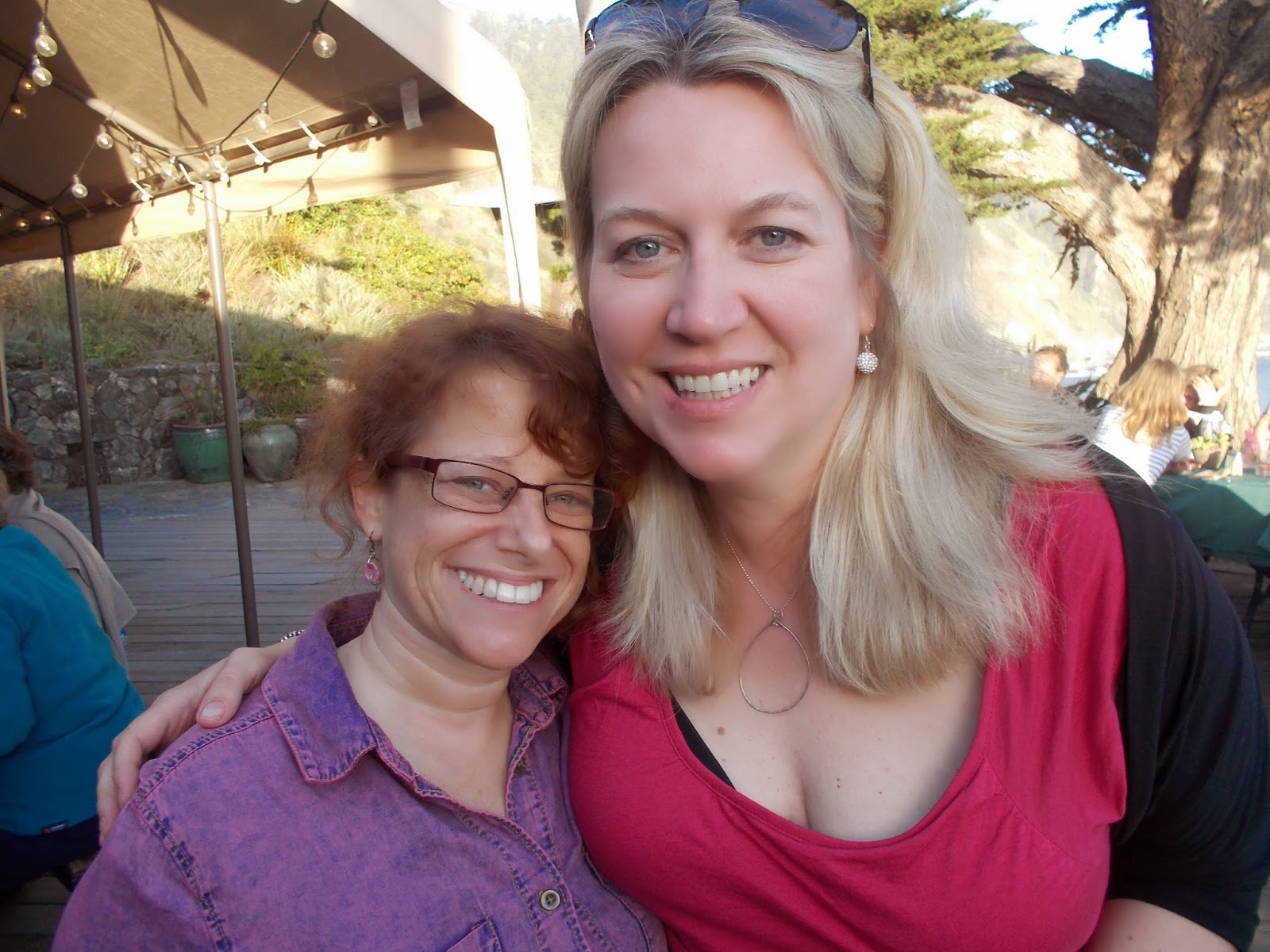 Funny, when I looked at the photo, I thought, Geeze, my head is tiny! Cheryl, on the other hand, claimed, "My head is so big." As we laughed, Jimmy, spouse of another wonderful author, Samantha Dunn, told Cheryl she need not worry because "Ted Kennedy had a bigger head." I couldn't believe I was in the middle of this conversation. It doesn't get better!

Though Cheryl has plenty of reason to have a swollen ego - her book, Wild, will be released as a movie starring Reese Witherspoon, she's buds with Oprah and spent time on Oprah's residence in Maui, she has a beautiful family, she's been a successful writer for many years, etc. - she isn't at all big-headed. She's incredibly down-to-earth and humble. I admire her more than ever.

More stories to come. In the meantime, I'll make rounds as quickly as I can. Thank you for your patience; I've lots of catching up to do.

I'm extra appreciative of all your support (emotional and financial) with my Every Dollar Counts campaign for suicide prevention.

Life is beautiful right now. I hope you can say the same.