I. Today, the lovely L. Diane at Spunk on a Stick has given me the spotlight. Feel free to visit her, and read what I have to say about self-publishing.


II. Reminder: We're only one week away from the silliest blogfest in the history of silly blogfests, The Anti-Blogfest Gary Fest! 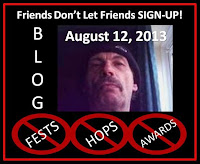 Thanks to those of you who already signed up! If you don't know Gary, he's a very nice guy, despite the prison-lineup shot above. You can find him at Klahanie. Gary hates blogfests, so this one's in his honor. It's going to be packed with playfulness, and it may even be therapeutic for many. (Gary's not the only blogfest-hater.) So even if you don't know him, I encourage you to join the party.

The rules: Create the titles of three PG-13 blogfests you would never join, and then add a descriptive sentence or two.

Sign up here!
"http://www.linkytools.com/basic_linky_include.aspx?id=203639"
Ssh, Gary's coming. Pretend I had nothing to do with this. Thanks. Wink.

I admit, Reality TV has merit. At least it did once. At work, I sometimes get have to watch TV with my clients. They were watching a reality show called House of Joy. On it, the woman (whose name I assume is Joy) was teaching her daughter to sing "Jesus Loves Me" as a surprise for the girl's brother's birthday party. The little girl was adorably bubbly and sang beautifully, while Joy played the piano. Though Joy didn't seem impressed, she told her daughter she'd practiced enough. Then the girl wanted to change things up.

"How 'bout we change the words," she said to her mom. "How 'bout  'Jesus loves...chocolate?'" She beamed with pride at this suggestion. I wanted to swoop her up through the TV screen, hug, and then adopt her. Joy, however, was worried that her brilliant daughter was going to ruin her son's party. Lighten up, lady! It's just chocolate!


On that note, may Monday offer sweetness.

Again, I'm guesting over here if you'd like to visit. Thank you!