It's Here, The Anti-Blogfest Gary Fest!! 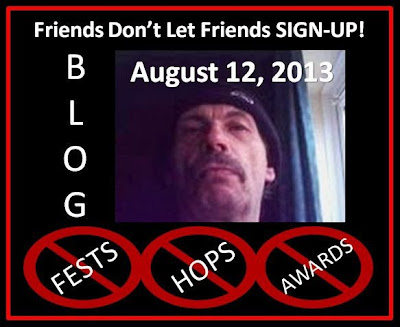 *DO NOT SUGGEST A BLOGFEST TO THIS MAN, AND NOBODY GETS HURT.*

It's here, the Anti-Blogfest Gary Fest in honor of Mr. anti-blog hop himself, Gary at Klahanie!!

How to play: Write the titles of three PG-13 rated blogfests you would never join - and then add a descriptive sentence or two.

Late for the party? No worries. Just bring extra chocolate and a 250 USD deposit (refundable upon receipt of proof that you didn't break anything) and sign-up here:
"http://www.linkytools.com/basic_linky_include.aspx?id=203639"

I would never join #1 because I find arrogance - especially when combined with misuse of the apostrophe - rather ugly.

A blogfest for people with no tolerance for those who face mental health problems.

Now, I'm shifting gears to a more serious tone. Gary dedicates himself wholeheartedly to breaking the stigma of mental illness. Since this is Gary Day, I want to draw attention to this critical issue through personal disclosure.

Mental illness has plagued my life for years, and it runs intersect with my career path. Many years ago, a family member, who had always been very sensitive and mild-mannered, was overcome by psychosis and voices (auditory hallucinations). He was diagnosed with schizophrenia.* I've also worked with sweet and gentle clients who were tormented daily by voices telling them to harm themselves and others. The former love of my life, too, combated a slew of mental health problems, none of which he acknowledged --due to societal stigma and his own stubborn pride.

Further, I've battled depression throughout my life. It's under control now, but its vengeance strikes unexpectedly. Despite or perhaps because of this, I am able to laugh and smile. Depression doesn't necessarily have a permanently sad face attached to it.  In fact, it usually doesn't.

I know I'm not alone in this; writers and artists are sensitive types. I've read a number of posts and comments about depression. It's on the rise and ever-rising, here in blogland and across the globe. So too are all forms of mental illness and mental health issues.

What can we do but support each other, speak/write through it, and lend a voice to Gary's fight?!

Thank you, Gary, for being an inspiration. Keep up the fight. We love you, and we love your hate for blogfests.

Thank you, dear readers, for your contributions to this fest, for hopping around, and/or for being willing to go dark with me for a moment. I appreciate it.

Keep faith, a smile, and a side of chocolate.

*Despite what most think, schizophrenia does not involve multiple personalities. Multiple Personality Disorder does, and both are horrendous conditions that a person develops through NO FAULT of their own.