I'm fighting a cold, so I dusted off a weird picture from days of  'ole.  First posted in 7/10, this clown comes with apologies and a handful of stellar comments. 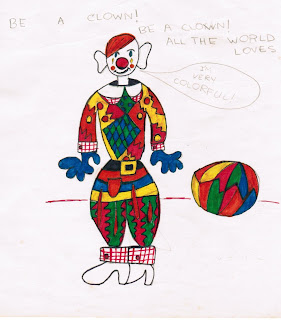 Gorilla Bananas said That's a great drawing, although there is a slight resemblance to Hitler which we'll ignore. I especially like his pantaloons. Are those his underpants round his ankles?

Powdered Toast Man said I think another clown threw up a box of crayons on this clown.

Tgoette said Lovely drawing, Robyn. So tell me, did you take a lot of LSD when you were 11?

Kal said I like the goofy fingers and colorful costume. This is one clown I would not beat to death upon meeting him I think.

Have a great Thursday.
Keep a smile and a stash of chocolate.