Woman on the Verge of Paradise: Surrealism and Cemetery Sex 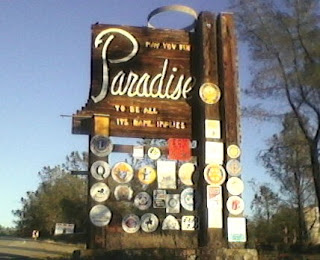 Sign reads: "May you find Paradise to be all its name implies."
Thanks for joining me on the verge of Paradise, as a new chapter of my life unfolds. If you're new to Life by Chocolate, or just madly trying to catch up with your blog reading (Can we ever truly catch up?), this non-fictional autobiographical story begins here.

With both housing and the job secured up North, I shall awake to bid farewell to the San Francisco Bay in twenty days. I’ll miss its bold beauty and flavorful culture: the taquerias every few feet in San Francisco’s mission district, the bridges spanning broad stretches of shimmering water, the diverse communities that have offered my heart and brain entry into more tranquil enlightenment. I’ll miss having 12,000 choices for everything – be it a yoga class, movie venue, ice cream parlor, or underwater co-ed rollerblading midget sumo wrestling match. You can find it all here.

In spite of my sadness, and my bewilderment over that midget wrestling thing I just wrote, I feel like I won the lottery at precisely the right moment. The past 3.5 years shook me with two ugly job lay-offs and marital explosion – just one month after celebrating our first anniversary. As I was grasping for fresh air, I met Writer Nora Profit. She offered entrance into the writing world and a chance to start anew, to move to Profit in Paradise. Who could turn that down?

Even my discourse at the Writing Loft has matched the surrealism of this time. You remember Mimi, right? She greeted me with a hug when I first arrived at the Loft during last month’s visit. Mimi’s a fast and furious talker who dresses conservatively but dons bright pink lipstick. This shouting shade of pink is beginning to make sense. Unlike most talkers, Mimi’s babble fascinates. I hang onto her every word.

Here’s a snippet of dialogue from that first visit. Nora, Mimi, and I were sitting in the cozy entrance room at the Loft, winding down after a full day's work.

Nora (to me): I haven’t seen your writing yet.

Me: Oh, it’s just silly humorous stuff like my series “On Why I Choose Celibacy.” I post men’s on-line dating ads and embellish with my own comments. I just gave an award to a guy I call “Mr. Cemetery.” He’s looking for mutual cemetery in a relationship.

Nora (appearing confused): You mean someone to share a cemetery plot with?

Me: I think he means "chemistry." He wrote, “If the cemetery’s good, everything else can fail.”

Nora and I burst into laughter.

Mimi (interrupting the guffaws): Well, I've gotta say that sexual chemistry in the cemetery can be really good.

Nora and I gasp quietly and then chuckle, with a lot less zest - likely due to shock.

Mimi: Well, he was my husband.

Nora and share an almost-forced giggle, eyes glazed over.


Mimi: And it was during the winter!

Nora and I sit in silence. Mimi clearly wants to elaborate but stops short. The conversation died with this revelation about sex in the cemetery. I can’t help but revere Mimi and anticipate much more lofty discourse after I move. It’s keeping me motivated to hurry and pack my things. Continued surrealism clearly awaits.