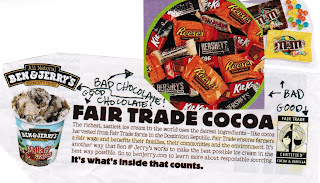 I simply hate this! Two of my great loves – kids and chocolate – have been at a morbid impasse for years or, perhaps, centuries. While I previously enjoyed a blissful dose of cheap (i.e., Hershey’s) chocolate, I was ignorant of the true cost of this pleasantry. As one who lives and blogs a life by chocolate, and as a social worker addressing child abuse for over 15 years, I feel compelled to inform. Please be mindful of this information when purchasing your Halloween candy and/or when feeding a cocoa craving. Thank you!

Child enslavement plagues the chocolate industry. Every year, thousands of youngsters are kidnapped, trafficked, and sold to cocoa plantations. The average price per child: $1.20-1.90. The rate of pay: $.01 for chocolate that is sold for $1 in the United States. Sometimes, the children receive no remuneration. Often, they have no concept of a chocolate bar. Rather, these children are forced to endure 12-18 hour workdays, handle machetes without proper training, climb high trees – all the while exposed to hazardous chemicals in a treacherous climate. Should they rebel or perform “poorly,” they are beaten. Should they try to escape, they are killed.

A vast majority of these known abuses occur in West Africa’s Ivory Coast. Each year, 15,000 children between 9 and 12 years old are enslaved on cocoa plantations in the Ivory Coast. Recently, three reporters in this region were jailed for investigating the crisis. (They were subsequently freed on impossibly high bail terms.)

Hershey’s provides the dollars that fuel these brutalities. While Hershey’s claims moral outrage, it continues business with the Ivory Coast. In fact, Hershey’s refuses to disclose the specific suppliers of its cocoa. Meanwhile, other big chocolate companies, and many smaller ones, act to ensure exploitation-free products. Thus, Hershey’s singular priority remains clear: ever-improved wealth (at the expense of children’s lives).

Certainly, the world’s largest chocolate corporation can afford to take a stance. With 12,000 employees, Hershey’s continues to boast over $5 billion in revenue annually - despite harsh economic times. Americans pay $15 billion for chocolate each year, with nearly 43% of this for Hershey’s candies. This conglomerate acquired Sharffen-Berger in 2005 and Dagoba in 2006. It continues to produce a number of non-chocolate products, such as Twizzlers, along with countless non-food items.

I am further disheartened to learn that Mars/M&M and Dove (which now owns Mars/M&M) do not assure untainted chocolate. M&M’s are (were) my favorite, and I spotlighted them in several posts. I now enjoy other chocolate options, though.

It’s questionable whether Nestle is on the good or bad side, as information is mixed. Nestle appears to be making some socially conscious efforts, while Hershey’s does not. The bottom line is that any form of chocolate is preferable to Hershey’s.

..to be continued with good, good chocolate alternatives.