On Breasts and Boobs but Mostly Boobs 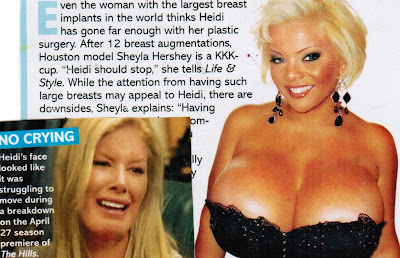 According to The Oxford Dictionary of Current English, “boob” is a:

I can safely say, then, that I hate really big boobs. What irks me most in the boob arena is when said boob makes lots of money for: (1) being said boob, (2) making said boob, or (3) having a pair of said boobs.

Truth be told, I’ve got ‘em. I mean, I’m rather top-heavy. My bra size is..Hey, wait a minute, you’re not getting that information from me! (Nice try, though.) I did inherit my maternal Jewish ancestors’ Ashkenazi bosomy figure. Should I live to be a Jewish ancestor (This it should be everybody’s goal, it should.), my bosoms will surely reach the floor – and not just while I’m engaged in a raucous game of Twister at the Old Jewish Home for Aged Jewish Ancestors. I suppose I’ll save on having to mop the floor. But let’s not talk about my bosoms anymore. Oy vey. I can’t believe you got me started on that topic!

Let’s now discuss the boobs pictured above. To the right is model Sheyla Hershey. The gal’s got the world’s biggest pair, size KKK. Thus, the world’s biggest breasts are the size of one of the world’s most vile racist organizations in history. This cannot be a mere coincidence, right? She lives in Texas, after all.

To the left is Heidi Montag, who is crying even though she is reportedly incapable of crying due to having undergone 13 elective surgeries. Ms. Hershey imparts caring advice for Ms. Montag. “Heidi should stop,” Sheyla states astutely. “Having people stare at you can become uncomfortable. They’ll come up to you out of nowhere.” Um, Ms. Hershey, let’s back up. I know it’s hard for you to move backward, given gravity and all, but did you not undergo this uber enhancement for the sake of attention? Further, how could people approach you from a direct line of vision? It would surely be risky to do so. Thus, while they appear to be coming out of nowhere, they are merely entering the scene from whence entry is logistically feasible.

Another intellectual powerhouse, Life & Style Magazine, claims Heidi is “forced into more surgery, thereby risking her life.” Dear reader, don’t you hate it when you already look objectively gorgeous but you’re forced into your 14th cosmetic surgery? I know I do.I don’t mean to make light of the topic. [There’s nothing light about it; Heidi’s going for breasts that will weigh 7 pounds each. Really.] Seriously, the breast should not be called a boob in the first place. There are far too many messages that demean and objectify women. One wonders where this term came from. Note that Oxford claims uncertainty on the matter. I don’t trust this Oxford fellow. But really, what do breasts and fools have in common? They certainly don’t look or act alike. Fools are never pretty to look at, nor do they secrete milk. Okay, maybe some do. I suppose some boobs and breasts share a squishyness factor, but that’s about it. As long as the term holds, I suggest every women gets a couple of fools to undergo the mammogram exam for us. We might as well milk it, whether or not we're lactating.

In closing this piece of literary foolishness, there’s nothing wrong with a grown adult making a thoughtful decision to undergo elective surgery – once or perhaps twice. I think it’s rather concerning that people are able to get their umpteenth cosmetic procedure, though. The biggest boobs of all are the surgeons! One (e.g., me) might suggest these so-called Doctors have strayed from the Hippocratic Oath. After all, surgery is surgery. It’s all traumatic and risky for the body and, perhaps, mind. However, plastic surgery is sugar coated with names like “tummy tuck.” It's become so commonplace. I can envision the future drive thru. A car pulls up to the speaker at In and Out, requesting 2 super value deals. The cashier asks, “Would you like fries with those enhancements? Today’s special side is the face lift, tummy tuck combo. Large or small cups?”

Perhaps the most we can hope for, through all of this boobishness, is that breasts will re-claim their name and boobs will take up a lot less space on this planet.