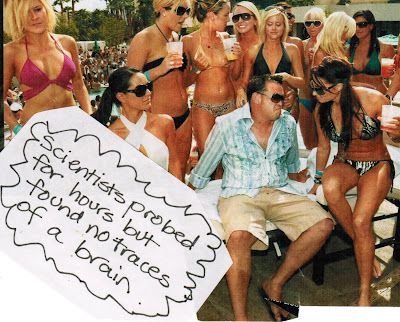 Years of tedious, painstaking research on the BDFH (blind date from hell) travesty, and I think they're onto me. I don't mean that literally. Drats. I mean: Phew! I'm sure hundreds of them want to date me, but they're a tad nervous about the subsequent blog posts. Performance anxiety and all. It's understandable. It happens to everyone - said with the feigned compassion that a woman's trained to offer. As I settle into chronic celibacy, dear readers, you need not worry. I do have plenty of vivid memories to choose from. Afterall, and in case you didn't pick up on this the 228th time I mentioned it, I make these sacrifices strictly for your entertainment.

Let's take a look at Mr. Special. Note: In California, one does not strive to achieve "special" status. It's the special ones who got to ride the short bus home from school - once they located the bus stop. Please understand that I'm not saying there is anything wrong with being special. I'm not insensitive that way. [I'm insensitive much more generally. I thought you knew that by now.] As a Social Worker, I've assisted many wonderfully special people. I just have a slight bias in favor of dating men who are not so special.

Years ago, however, a certain special BDFH arrived on time to the Park Street Cafe. I found him handsome, and it was downhill from there. Mr. Special proceeded to grab a napkin on which to diagram his inner ear. He had some hearing loss that was surgically corrected. Thus I was clearly in need of the full description. (Thankfully, I was not subjected to flow charts or a powerpoint presentation.)

Into some boring conversation, I awoke to learn that Mr. Special needed to excuse himself to use the restroom. The restroom, FYI, was through the back door and down a walkway. Several minutes later, Mr. Special returned to report that he was unable to figure out how to open the back door. Mr. Special apparently did not realize you needed to push on the door in order to open it. He sat back down, and I guess he held it in. I'm guessing he's still holding it in.

We talked a bit more, and I told Mr. Special that I taught preschool. Mr. Special asked, "Does preschool come before or after kindergarten?" Mr. Special did not realize that the word preschool is not the word postschool nor the word duringschool but synonymous with the word youreallyarestupidaren'tyou?.

Finally, the date was over, at least for me. Mr. Special asked if I wanted to walk to the beach with him. It was just a few short blocks away. I told Mr. Special that, no, you need to find it on your own. Head towards the water. It's blue. Walk past Peter Pan preschool; you'll see it before Dumbo the Elephant Elementary School. No, I didn't actually tell him that. It was worse, at least for him. I let Mr. Special get lost on his own, telling him I needed to do my grocery shopping.

The moral of this case study: You can lead a date to water, but you can't make him think!