Woman on the Verge of Paradise: The House Hunt 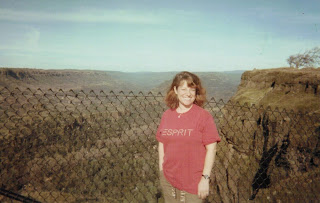 Me overlooking the Butte County Watershed on the verge of Paradise, CA, 1/18/11
Thanks for joining me on the verge of Paradise, as a new chapter of my life unfolds. If you're new to Life by Chocolate, or just madly trying to catch up with your blog reading (Can we ever truly catch up?), this non-fictional autobiographical story begins here.
~~~
My education in draconian measures was sandwiched between the ups and downs of a housing search. It wasn’t easy, but I found a home. I’ll make the move at the end of February. Here’s the recap.

Jim offered my next best hope. He showed me his family’s second – or perhaps third or fourth– home, a nice, new house that I would eventually share with three others. At that time, he informed, I was the only prospective renter. We chatted for a good hour, during which Jim provided tips on the neighborhood, social scene and eateries. I was sold and asked for a housing application.

That’s when things deteriorated. “Well, I need to call my wife. She takes care of all the details in the lease.” Boy, does she ever. I would learn that Jim is one of those husbands who’d do best to never talk; his wife would ultimately counter everything he said. She runs a tight ship, a dictatorship.

Per our agreement, I  naively dropped by their house that evening to pick up a copy of the lease. I suddenly found myself in a family meeting, mafia style. I was afforded a seat at the very high kitchen table. Climbing onto an equally high stool, I was surrounded by mother, father and daughter. “We want to answer all of your questions,” mother (heretofore referred to as Sergeant) began, “but there are lots of people interested in the house. I’m showing it to a family this Friday. Our daughter might move back in too. I’ll make my decision by Saturday. You’re working at The Writing Loft? Mm hmm, so you’ll be doing the newsletter? Well, we have the option of asking for a co-signer if, say, the renter is beginning a new job. Here’s a copy of both leases. We’re going to sell the house when the market picks back up, but you’ll need to sign on for six months. I can’t think of anything else. It was a rough day at work. I’m hungry. Nice meeting you.”

Sergeant pushed two leases at me, one for the master bedroom – which I’d clarified I couldn’t afford. Each document was five-pages long and fraught with enough legal minutiae to keep our nation’s healthcare plan at a stalemate. Here’s a snippet: “Renter must take garbage cans to the curb by 0700am on Thursdays or will be subject to execution.” Oy, talk about draconian! Oh, maybe it read “eviction”. I don’t know. I just know that I left feeling scared and offended, but mostly scared.

Once I caught my breath, I reconnected with Steven. We’d scheduled a meeting to see his house, but I canceled in favor of a female roommate. The women weren’t boding well for me, and Steven graciously agreed to reschedule. Upon arrival the next day, his sister and baby niece greeted me too. It was a friendly exchange in a nice, comfy home that would allow sufficient privacy and room for my furniture. It’s far from Michael too.

The rent’s just over one-third of what I’ve been paying in the San Francisco Bay Area. I salivate at the thought of writing a three-digit versus four-digit rent check.

Last week, Steven accepted me as a tenant. I started getting nervous over the weekend, though, having not yet received the lease. Did he read my blog and notice that I’ve had some -uh- issues with men? Thankfully, yesterday’s text message was assuring. “Hi Robyn. I was thinking of getting a cat, and was wondering if you have any objections. Please let me know. Steven”

This spurred a whirlwind of memories. I’ll never forget the moment my “Nomezy” -- Naomi, a beautiful Snowshoe feline owned by my (ex)husband— glared up at me. Her innocent gray eyes asked, “Where are you going? Why?” I had no explanation as to why I’d been kicked out of our home. With all the strength I could muster, I consoled her through my tears. “Sorry honey. Thanks for teaching me to love a cat. I’ll miss you.” And I do.


Clenching my cell-phone, I snapped back into the present and replied to Steven. “I’ve had a cat before, and I’m fine with that. Thanks for asking.”