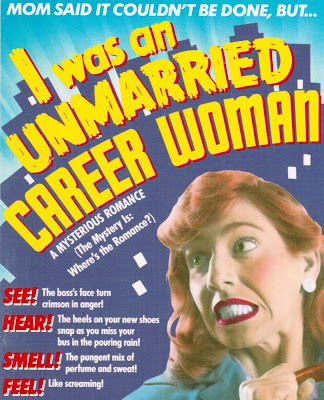 I know it’s been a while since I’ve updated you on the dating scene. I’m sorry. I just don’t have the material for a post. Thus, the best I can do for now is this Non-Post BDFH/Blind Date From Hell Post. Let me further explain.

A few men have expressed interest, but they really aren't worthy of mention.

Dude #1 kept messaging, and I kept ignoring these messages. His reported weight is 220 lbs. Mind you, if you didn’t already know this, I’m a tiny person. On a good day (say, a Saturday morning before I’ve eaten breakfast), I weigh 105 lbs. Okay, make that 106.5 lbs (naked and while holding my breath, leaning slightly to the back of a generously kind scale). It’s not that I’m skinny. I’m just extremely short - less than 5 feet tall on a good or bad day, without heels or a top hat. Thus, the thought of being crushed (literally) by a boyfriend simply does not appeal to me. So you see, there’s nothing yet to write about.

Needless to say, Dude #1 persisted and persisted for weeks, progressing to a “What about me? I’m a nice guy.” Clearly, I needed to respond, else the messages would not end. Because I’m so nonjudgemental and sensitive, I took full accountability for our weight differential and emailed back: “I’m sure you’re nice, but I’m less than half your size. Good luck to you.” I’m rather proud of my diplomacy. You'd vote for me, right? At least, I hope you understand why I don’t have enough material for a BDFH post.

Onto Guy #2. He never actually emailed but listed me on his “hot/favorites” list. Even more flattering, he – or more likely the model whose photo he posted in his profile page- is pretty darn gorgeous. So what’s the problem? Well, for one, he lives in the Middle East. Those overnights would have to be through-the-roof to make it worth the commute. Worse yet, let me share a snippet of his introductory blurb: “Let's sing: Fill your heart with love today, don't play the game of time, things that happened in the past only happened in your Mind - So Forget your Mind And you'll be free. Happiness is happening, the dragons have been bled.” He goes on with this jingle a bit, but I’m sparing you the rest, because I like you and all. However, I am rather scared by this little blurb. Are you? Well, at least you're getting why I don't have the material for a BDFH post.
Door - I mean Dude - #3 lives a lot closer, but still across state lines. He emailed offering me M&M’s for merely chatting with him. Outrageous! What kind of a person does he think I am?! Of course, I responded immediately! I did tell him that he’s geographically undesirable, so he naturally suggested a meet-up in Vegas. Isn't that where all the geographically undesireables hang out? Please dude, you didn’t even forward the M&M’s. That isn't even the worst of it my friend. Are you ready for this? He’s a lawyer. Excuse my profanity. Alas, I hope you’re finally realizing why I haven’t been able to keep you updated on the dating scene.

Onto an actual date that’s not worthy of making it onto my blog either. This past weekend, I had coffee with Dude #4. At first, second, and third sight, he has a very long forehead . But that’s understandable, given he’s quite intelligent. I mean, I cut him slack because his brain must be at least 30% larger than most. The guy's trilingual and has a Ph.D. The problem with some brainiacs, though, is that their intelligence often trumps any semblance of social aptitude and courtesy.
You see, I ordered a bran muffin and a chai tea. He asked for a croissant and coffee. Those four items sat on the counter, and I stood behind him so that he would be directly in front of the cashier. Still, the cashier asked, “Are you paying separately or together?” I heard the Jeopardy music start to play in the background. With my watch ticking loudly, time stood still during a gruesomely awkward pause. He said nothing. Annoyed as hell, I broke the silence with a definitive, “We’ll pay separately.” “Yeah, yeah, it’s separate,” he agreed with relief. I know, I really should’ve bolted right then and there! Freakin tightwad!
Because I'm so nice (as we all know, right? right!), I reluctantly gave him another 48 hours (or was it minutes?) of my time. As soon as there was another gruesome pause, I announced that I had errands to run, and zipped away following a quick goodbye handshake. Don’t you wish you were back out on the dating scene to experience this type of exciting romance, my friend? You do at least get by now why I don't have enough for a post, right?

I suppose I should look on the bright side. It could’ve been worse. He could’ve talked incessantly about his ex (I’m guessing he doesn’t have any exes. At any rate, he seemed rather enamored by his mother). Further, he could’ve paid for his croissant with a coupon. He also could’ve had a double chin in addition to a long forehead. But he didn’t. For all of these things and more, dear Lord, I’m truly blessed.

Still, I wish I had some good material for you on the BDFH front. Sorry I have no updates. I hope you understand.