Love is in Someone Else's Air and the BDFH - Part II 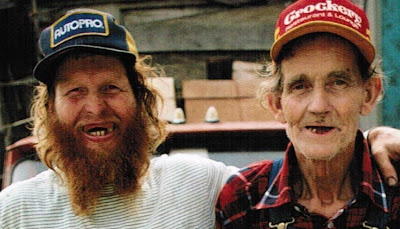 continued from Love..yada yada..BDFH/Blind Date From Hell - Part I.
As we sat down at the table, I hoped that my hot tea would perhaps provide a smidgen of warmth on this BDFH. To be fair, and in the lovey dovey spirit of spring time, I give him credit. He impressed me greatly. Within the next 90.5 hours (or was it minutes?) that followed, he displayed a substantial number of the traits on my checklist. The guy's quite remarkable. He accomplishes all items on my checklist of red flags.

Here's a bit of dialogue with corresponding checklist items. [Note: "Cheapskate" is already checked off.]

2) Indication that he can't keep his pants zipped. He rather immediately informed me, “I only cheated once, with my first girlfriend. It was horrible for the relationship. I'll never do it again." (I wasn't as surprised by the fact that he shared this - though it seemed a rather peculiar first date strategy- but that there was a point in time during which 2 women were after him.)

3) Indication that he can't keep his mouth zipped. From the moment he saw me, he kept talking and talking in one longwinded neverending run on sentence kind of like this one but it was a lot longer and a lot more boring and spewed in a completely monotone and stoic manner with no break between words or sentences. Phew! At least, it gave me time to look at my watch and finish my tea. Plus, I jogged around the block and checked out the sales at the antique shop across the way. Okay, I didn't do those things but wish I had.

5) Indication of bigotry. Further, he advised: "I only tell racial jokes to my friends, and we know we're just joking." (Yeah, and I suppose you're not homophobic either. After all, you do occasionally watch "How I Met Your Mother" starring Neil Patrick Harris.)

6) Indication of anger issues. "I have a sharp tongue," he reported. "I’ve had many friends turned enemies because of it." (You ain't seen nothing yet dude. Oh, I'm sorry, did I just spill the rest of my hot tea on your lap?..Nah, I didn't do that either but wish I had.)

To make a long story even longer, he wasn’t rude. Well, not intentionally. It could’ve been worse. This is all to say that there is a happy ending. I mean, someone’s story’s gotta have one. Right? I suggest you check out their blog.

As for this BDFH, it started ending when he finally said, “I’ve had a nice time. Would you like to get together again?" “Well, it feels like just a friendly connection," I responded. Dejected, he hung his head low and began shoving his many publications back into his briefcase. “Okay, this is a bit awkward,” I thought. “ Do I say something more?” “Do I plant a big wet one on his cheek as a ‘no hard feelings’ move?” “Do I go back to the counter for some chocolate?” I decided to dart the hell out of there. Aah, spring had sprung, and so had this Robyn.