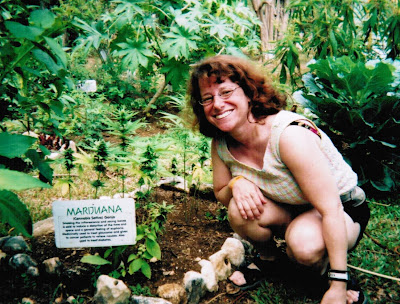 This post is continued from the last, Imagine.
No wooies: Photo taken in Jamaica. This is as close as Mary Jane and I have ever gotten.

I hope someday you'll join us, And the world will be as one.
I tried to resist it. I really did. The woo-woo culture is so counter to my LA upbringing. But I must admit that I am a transwoo-woo. Yes, I have become one with woo-woodom, though I remain closeted most of the time. Having learned to drive on the LA freeways (Note: I wrote “the” LA freeways. See California Dreamin' for that reference), I will perhaps never be on the extreme end of the woo-woo spectrum; I’ll persist in falling a bit closer to woe than woo. Sadly.

Imagine no possessions. I wonder if you can.
The Bay Area is replete with wonderfully intoxicating mineral baths. These bits of utopia encompass a celebration of woo-woodom. One leaves the computer, cell phone, and even clothes behind. Given my love for warm baths, I set out years ago to visit the hot springs for the first time. Because I was not a woo-woo girl and resisted becoming one, I had packed my bathing suit. While lounging at Harbin in my brightly flowered one-piece, though, I realized that (1) people were staring at me, and (2) people with lots and lots to hide were not hiding anything. So I stripped down too, and I stopped getting stares. I rationalized that this action was simply a matter of perfectly acceptable situational nudity facilitated by peer pressure and the need to brown my blindingly white skin. Note that I had doused my body in sunblock SPF 108 or so.

No need for greed or hunger, A brotherhood of man

While soaking, I learned a lot. For one thing, everything we could ask for is here for us for free and in earthly form. For another, there are woo-woos who take parental love to a whole new level. I met a woman who immediately freely shared that she bought her daughter a badly needed gift as a birthday present. This gift was a kama sutra coach to work with her daughter and son-in-law. Upon receiving the gift card, her daughter asked her what kama sutra meant. Next, the lessons did not take. The couple still doesn't have a sex life. Can you imagine? I mean, not imagining a couple that doesn't have sex. That one's easy. But what a waste of a wonderful gift imparted by a parent.

Imagine all the people Sharing all the world
What I’m warming you and me up to is the harsh reality that woo-woodom is perhaps a really good thing. I can’t hold it in any longer. Sigh. I am a full fledged woo-woo! Phew! I said it. The proof rests in the fact that - are you ready for this? I hugged a tree! It wasn’t planned. It just happened. Nothing about it was harmful. Don’t worry. See, I was at one of those woo-woo retreats on mindfulness meditation. I was there because, um, I was out in the woods looking for a Starbucks. I stopped at the Land of the Meditative Buddha to ask for directions to the nearest Starbucks (Buddhists drink coffee, right?), and they must have hypnotized me and offered me loads of chocolate. I don’t remember the details, but I found myself staying for the weekend. Then, there was this lengthy walking meditative exercise through the woods. I was strongly drawn to one specific huge and attractive pine tree. It oozed power, dignity and purpose.

You may say that I'm a dreamer, But I'm not the only one

In front of this tree, I had a peaceful, hazy recollection of celebrating Tu’bishvat (the Jewish New Year of the Trees). The leader of that celebratory gathering urged everyone to take time to hug a tree, at some point. His voice echoed through me. Now was my time. What did I have to lose? I mean, no one would see me. They were all in their own little woo-woo worlds. So I gave this staunch, well-rooted tree a loving embrace.

I hope someday you'll join us

When the meditation group reconvened, a woman announced, “I saw Robyn hugging a tree.” Damn b*tch! I could no longer hide my woo-woos. So I’m coming clean in the blogosphere too. Still, I really am more woe than woo. Oy, clearly conflicted between denial and the healing, holistic, therapeutic experience of woofullness, I admit that I’m glad to be part of the group.

Imagine everyone in the world has access to a beautiful sturdy tree. Imagine now that everyone takes the opportunity to give that tree a great big hug. It starts there, and we’d all be better for it.

And the world will live as one.

Posted by Rawknrobyn.blogspot.com
Email ThisBlogThis!Share to TwitterShare to FacebookShare to Pinterest
Labels: autolyrics