Cheersfest: Toasting to and Roasting of the Bird

The blog community loves Mr. Arlee "Lee" Bird! So this roast is for him. 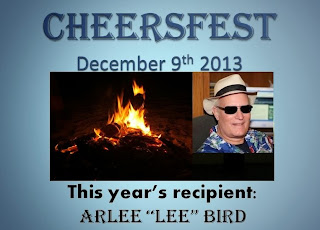 "The original brains behind the annual A to Z Challenge, Lee can be counted on to pay it forward and is a well-respected member of the blogging community."

Four questions about Arlee Bird:
1) Why did Lee come up with the A-Z Challenge? Lee is old. He forgets the alphabet. Creating The Challenge was cheaper than Hooked on  Phonics.
2) If someone dreams about being a juggler, what does it mean? They like big jugs?
3) Is a post by Mr. Bird worth two in the bush? Depends which bush. Bush Sr? Yes. George Dubya? No. Not without tossing in Hooked on Phonics.
4) Who could play Lee in a documentary? (Living or dead.) George Burns. Living or dead, they're both old.

I don't know what flash fiction is, so I wrote a limerick.

Lee Bird was a Juggler by trade.
As a bachelor, the dude had it made.
Brown Jacketed babes watched, gawked, and then stayed.
Tossing fire -- a challenge ne'er delayed.
In the end, Lee always got....paid.

For Bonus Points:
· In +/- 40 words, can you come up with a caption for Lee’s Facebook picture? 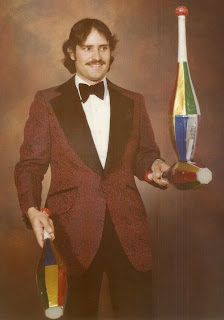 "Pick me, ladies! Mine's multi-colored, and I can keep it up for hours!"