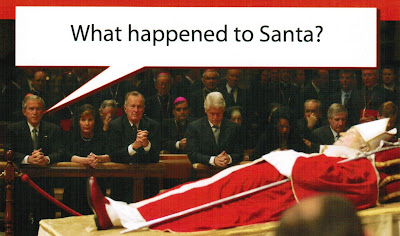 Oh my Lord! I mean, my goodness! How on earth did that photo get there? Damn hackers! It's in such poor taste, especially this Easter weekend. I am so sorry, dear readers. Well, since it's here, I hope it does not offend anyone except the former President George W. himself, and perhaps his reading tutor.


The brilliantly foolish nominations for the 10th BIGGEST AMERICAN FOOL OF THE DAY:

1. Mel Gibson for so many reasons but mainly because I can't see his smug face without wanting to punch it. x Kitty Moore

I second the nomination of Mel Gibson for calling a woman "Sugartits". Anyone who'd put sugar on a woman's boobs is a complete fool. Especially so with all the ointments and gels you can get these days. GorillaBananas

2. John Gosselin Shouldn't John be up there with Kate? He's been kind of quiet lately, but only because Kate's been hogging the limelight AsBlackAsObama

3. Vice President Joe Biden for going up to a live microphone and throwing an F bomb-- to the President!!! I am all for "being real" but,, every step we make as a country is being scrutinized,, our "second in command" should be seen with class and a strong verbal prowess. As Bugs Bunny would say "What a Maroon!" InvisibleSeductress

4. those dang "never hold the elevator door" peeps and

5. Rush Limbaugh for something bad he's going to do. CopyboyatNWM


6. Can we put Kate Gosselin on the list two times? PLEASE? Pretty Please? BossyBetty
7. The f*n b*tard in a Camry who sped past a patient line of cars waiting to turn onto the freeway onramp this morning. That was me in the silver Honda, at the front of the line, sir. That was me who you almost hit whilst simultaneously speeding AND slamming on your brakes as you cut me off in an intersection. Oh, you made it onto the freeway alright, and you didn't have to wait in that dreadful line, but I still think I'll have the last laugh. One of these days you'll be speeding along, the f*n b*tard that you are, and those brakes...well, you've read the news. (I just could not edit this one!) Tocalabocina
8. Sean Connery for endorsing the slapping of women on national television.And to later, reaffirm what he said! PatTillett
9. Sarah Palin and her Tea Party posse for her inspiring "Don't retreat, reload" advice to the right-wing extremist groups. Tgoette

10. Educated people who use apostrophe's before every 'single 's - nominated by thi's blogger a's an after thought when I came home to a memo for all Resident's.

Cast your votes now for 1 of the above 10, before I run out of "I Voted for the 10th Biggest American Fool" stickers.
Polls will close when I'm tired of the foolishnes's. (<-Note: final attempt to 'sway vote's.)
Winning nomination will be foolishly recognized.
Free parking and non-stale chocolate donuts available. (Sorry TS.)