Without a way to contact JT, I sat on a wooden bench in front of the stage, pretending to not be nervous about whether or not he'd show. I hope, hope, hope he shows. Nah. Don't get your hopes up. Forget about him. They always disapp-- JT came strolling through the area, confidently. He wore a friendly grin and casual attire.

I approached with arms extended.

"I'm the hugging type," I said. "Hope that's o--" JT wrapped his sturdy forearms around me for a brief embrace. 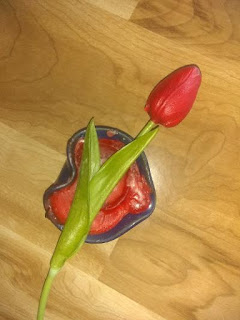 After the show, which went well --"You did great," he'd told me -- JT suggested we talk somewhere peaceful, perhaps his front porch. Woohoo! I wasn't the only one who was annoyed by drunken Jesus' interruption.
Free-flowing chatter ensued at a small black table by JT's front window. JT had lit a candle to illuminate the otherwise pitch dark setting. A tall thin glass holding tulips centered the table.
"Pretty flowers," I said, and he told me that they're plastic.
We learned of quite a few commonalities. Neither of us drinks or smokes. Neither of us owns a TV. Each of us opens the passenger's side car door first, when driving with a passenger. (This one I learned when I accepted a ride to his place. Afterall, he'd assured me that he's safe. I suggested, jokingly, that I might not be.  He seemed fine with that.)
JT, like me, is divorced.
"I'm not looking for an open relationship," I told him. "That seems to be what all the men I've been dating lately want."
"That isn't really a relationship."
"I agree." Phew. Wow. Is he for real?
Time flew. It was 1 a.m.
JT pulled one of the tulips from the vase and handed it to me. "You'll get real ones later."
At my car, we hugged, and then there was a brief moment of looking at each other, and then his two lips were on my two lips. We shared two sweet kisses.
"I didn't expect that," he said.
I was hoping, I thought. But not hoping too much, because you know how I've been so disappointed again and again and again, and then so disappointed again, by men.
***
This happened in early June.
The tulip, positioned atop a heart shaped candle, centers my kitchen table now.
Psst, JT's coming over tonight.