Happy December! It's that time again, time to reveal our writerly insecurities and encourage each other to keep at it. Thanks to Alex J. Cavanaugh, we can glean high volumes of sage advice from our peers. As you know by now, I just spew weirdness. But it's always fun. So jump aboard the IWSG train, if you haven't already. All you need is an insecurity or 200.
~~~~~~~~~~~~~~~~~~~~~~~~~~~~~~~~~~~~~~~~~~~~~~~~~~~~~~~~~~~~~
Robyn:  I'm facing your generic writing angst these days: What am I doing? I suck at this and yada yada blah blah blah, whine, whine, wine! Thus I knew I needed a guest who's motivational. Since it's December, I also wanted someone warmhearted. Flamboyancy and eccentricity are pluses. Santa didn't return my calls, so I found someone else. He took a break from AlPenwasser's hysterical blog to visit Life by Chocolate.
As a kid, today's guest was beaten (with a baseball bat) by a peer because he was obese. Thirty years later they ran into, and recognized, each other. The former bully asked his former victim for help; his wife had become morbidly obese. Today's guest sent the man workout videos. Talk about love and  forgiveness! He oozes it. It's Richard Simmons, folks! 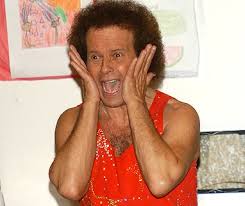 Nobody cheers. Stagehand, Macauley Culkin (he needed the work - holiday season, wife and coke habits), cranks up the applause meter. The one audience member, Miley Cyrus, sticks out her tongue, while humping a blow-up doll of herself.  Eww! So sorry. She must've thought we were featuring Gene Simmons. Macauley, don't give that troubled girl any camera time. He nods and shifts the camera back towards the stage.


Robyn:  Now, come on out here, Richard Simmons! Richard runs onto the stage wearing a red tank top, and blue and silver striped Dolphin shorts. He jogs in figure eights, flailing his arms with wild abandon. Richard then runs up to Robyn and kisses her on the right cheek, then on the left, then the right again.

Robyn: Really? Cuz I was just gonna talk. I ran a 5K last week. That's enough for the year, right?
Richard pauses and races over to Robyn. With his hands cupped over his mouth, he shouts in her ear: No excuses! Excuses make for fat cabooses! Move it!

Richard puts his hands on his hips and thrusts his pelvis back and forth. Come on, girlfriend. Up and back! Work it and twerk it, baby!

Robyn thrusts her pelvis forward and back, awkwardly at first. After a few reps, she grins blissfully. I haven't done this in a while. It feels good.

Richard: That's what I'm saying! Love yourself! Work it! Now down, and up. He does squats.Robyn slowing mimics him. So --huff--- Richard ---puff--- you've written lots of books, and did a bunch of videos and you're like 65 now. You're amazing.
Richard: Now, lunge. Lunge. Get down, baby! YEAH! Keep working it. Robyn, sweating, does half-lunges, while attempting to continue the interview. How do you keep up--exhale--at such a pace?
Richard: It's like this. He darts towards the camera, and places his hands on his heart. Number one, love yourself! Number two, get off those buns! Number three, love yourself! He blows a kiss and screeches his way off the stage, shouting ecstatically.

The camera zooms in on Robyn. Minus the buns part - we gotta sit a lot to write a lot - it really does come down to that. As corny as it sounds, self love and acceptance is where it's at. So keep going. Make mistakes and flounder, even when you think you suck. Because you don't. Love takes us to places we never thought we'd discover. Stay clean and  humble, though. Miley unleashes a beastly sigh. Robyn and Macauley look towards the audience, but Miley and her blow-up doll have sunk beneath the first row of chairs. Here, look at my stagehand. As a distraction, Robyn flashes pictures of Macauley Culkin, then and now:

If you don't know who Richard Simmons is, watch this. You'll be ecstatic that you did.