On Me, Men, and Meshugenah

How are you? Please say, and say honestly, that you're doing fine.

Life is meshugenah. This means "crazy" in a fun, Yiddish sort of way.

A lot of excitement has ensued in the aftermath of my breakup with Dude Three last Fall. No worries if you don't remember the story. I'll catch ya up. And because I don't have a real photo of them, I borrowed this resemblance from google images. 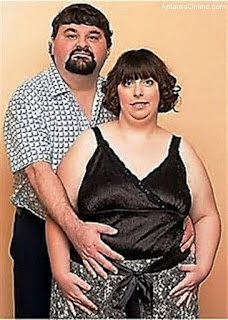 Here's the cast of characters:

Dude Three - latest boyfriend. Our relationship lasted approximately 7 weeks. I know. It's almost a new record for me. But when he proved himself an angry, mentally unstable man, I called quits.

Skank - A neighbor and a friend, initially. Note that I don't judge women who sleep around. I envy them. But this one gets the nickname Skank because she made moves on Dude Three while pretending nothing was going on, when I spoke with her about the breakup. She then announced her new love for him on FB with a photo of them holding hands. Next, weeks later, he moved in with her. Down the street from me. Note 2: We're all in our fifties. Note 3: This story falls under the genre of nonfiction.

Me - sexually repressed, not-wanting-to-settle-but-routinely-and-naively-settling me. Yet I typically come back to the realization that my life is much better alone. With batteries.

Months had passed since I learned of their coupledom. I grew tired of, but used to, seeing Dude Three's car every day and night. None of us spoke, though we saw each other regularly.
Skank would continue to park her car next to mine, in a space that isn't hers. (It's another neighbor, Geezer's. More on him later.)  But I remained mature and well behaved. You all helped me with that. ("Be tall, Robyn." You advised. I thus stood as erect as my 4 foot 8 inch stature allowed.)  Oh, besides the one time I shouted "Skank!" as she walked by my front window. (Damn Tourette's.)
One morning earlier this summer, I stepped out to put a few items in my car. Skank was by the mailboxes, a yard or so away. She'd purposely been parking extra close to my car, making it difficult to open my car door. I decided enough time had passed, I'd be mature.
"Would you please not park so close to my car?" I asked, in a polite and calm tone.
Things got ugly fast.
Skank dashed to the carport to show me that she'd not crossed an imaginary halfway mark. "Look! This is halfway! See this line! I'm not over the line! Geezer lets me park here! I'm not in your sp--"
I opened my car door to demonstrate my lack of space. "I can't even open this without hitting--''. My door hit her car, proving my argument.

Skank's eyes widened. She grabbed her front door handle, opened and then slammed the door viciously against my car. Then again!
Shocked and angered, my adrenaline soared.
Skank had left a visible long vertical streak of paint on my car...to be continued.

Hint: It gets worse.