Founded by the incomparable Alex J. Cavanaugh, the IWSG provides a space to reveal writerly insecurities and offer writerly support. Join us, if you haven't already. All that's required is an insecurity  or two hundred. 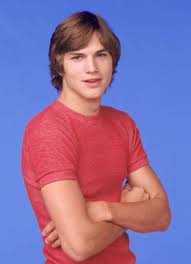 
What better way to feed your ego than to bash the filthy rich and grossly stupid? Ladies and gentleman, let's welcome Ashton Kutcher! Sorority girls squeal wildly. Stagehand Macaulay Culkin darts toward them, pining for some coddling. Instead, he's drop-kicked out the back door by a busty blond who holds up a sign: "Delta Kelso Do Mi Now!"  Ashton struts onto the stage. He points and winks at the busty chick, then tells her, Gimme 12 minutes in a few, Jennifer Mai Holiday! She gives a thumbs-up. Take a seat, Ashton. Robyn gestures towards a fat orange bean bag, as she sits in a desk chair. Rad!  Ashton sinks into the bean bag. Thanks for visiting, I guess. Robyn looks at her watch, as she covers her mouth to hide a yawn. You call yourself an actor, but I get the impression you're not acting. You're just a pretty boy who's a dumb*bleep*. A real life Kelso, with no dimension.

Oh man, dude, you're right. I have no Demi son. He chuckles, humored by himself, then stands up. The girls scream frantically. Ashton shouts the words to Michael Jackson's song, "The kid is not my son!" and attempts to moonwalk, then falls flat on his face. But Demi only has daughters with that real actor, her first husband, right? Ashton pushes himself up into a sitting position and shrugs. I don't know dude. Mila and I are having a kid, though. He stands up and pounds his chest. The ladies go wild.
They say you're worth about $20 million. That's twenty million per half a brain cell. You should use it, bro. Like remember that time when you tweeted that the firing of football coach Joe Paterno, who kept secrets about child molester Jerry Sandusky, was "in poor taste." Really? How can anyone be that stupid? And to cheat on Demi? And now you're with Mila...well, Robyn holds up a palm, offering Ashton a high-five. He scoffs. Ma'am, you're way old! Jennifer Mai Holiday's red lace panties land at Kutcher's feet. With a wink, he says, a threesome tonight, babe. Mila's always ready. Jealous, Robyn changes the topic. Let's talk about your senior year of high school, when you broke into the school to steal money and got arrested. All you regret about that incident is that your girlfriend dumped you afterwards. Yeah, man. She had big bazongas. You know what I'm sayin? I do know. Robyn looks down at her big, ever drooping bazongas. I'm suddenly reminded of twins. You have a twin brother, Michael, but you never talk about him. He has cerebral palsy and a failing heart. Michael advocates for people with heart ailments, but you don't. You don't use your fame for anything worthy. I do so! Demi and I, we started this sex thing place. You flaming idiot! That was an agency founded to fight child pornography and sexual exploitation.  Ashton nods. See, I like porn! I think It's time for you to leave, jack*bleep*! No problem! Ashton runs to Jennifer Mai Holiday, and the Delta Kelso Do Mi Nows form a line behind her.
Thanks for visiting, folks. My sincerest apologies for the lowly level to which today's show sunk. We cut to a  Public Service Announcement about the hazards of marijuana abuse amongst sexually promiscuous stupid pretty boys with half a braincell that they can't find, but enough money to feed Honey Boo Boo's family for two days.