Me and My Merchant Marine: Rum and Diet Coke, The Start 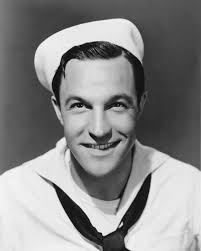 I followed Donna and her boyfriend du jour, Enrique, to get drinks. Chico's Elks Lodge, as I'd learn that night, includes a spacious reception hall - where we'd been sitting and would later dance; and a bar in a separate room across the way.
Donna led Enrique to the far end of the bar, smiled flirtatiously, then stepped slightly behind him. (Gentlemen, if you're not privy to this maneuver, it means "Take your wallet out and buy mine too.")
Ugh. I hate third-wheeling and needed a jolt. I nudged my way to the middle of the bar and placed my order. "Rum and Diet Coke, please."
"That makes sense," I heard, in a deep male voice. A man inches to my right turned to face me, approving my drink request.
"Doesn't it?" I replied. "Why waste calories on soda when you can get gobs of  'em in rum?"
"Exactly." He imparted a charming smile. He's handsome, I noted, in a classic film noir way, like Gene Kelly. But bigger, somewhat husky. Not the kind of guy I usually go for. No, this one's rather attractive.
"My name's Robyn," I extended my hand.
"I'm Troy," he responded with a firm handshake.
Troy sipped his drink then asked, "What do you do in Chico?"
I told Troy about the dance event, third-wheeling, and that I'm a writer and social worker. He listened thoughtfully. The dreaded question followed: "What kind of writing do you do?"
Crap! "Well, I dabble in lots of things except fiction. I published a small poetry book and I'm working on a novel these days." I stopped there. My brain continued...It's about my spectacularly unromantic romantic life and my remarkably sexless sex life. I've had a string of failed romances, through no fault of my own, really, except that I'm drawn to the deficient. You're an alcoholic, aren't you? You're awfully cute.
"Nice. I like poetry," Troy said.
Damn. A gay alcoholic!* Well, I could do worse. I have done worse. I smiled at him.
"So what do you do around here, Troy?"
"It's kind of complicated," he said modestly. "I work for the Merchant Marines on a spy ship."
"A spy ship!" My eyes widened, like an elementary school kid's. "That's sooo cool!" A voice inside my head yelped loudly: Date him, girlfriend. He'll give good story!
Donna and Enrique suddenly appeared behind Troy, waiting on me. Damn them.
"Sorry, Troy. It was nice meeting you, but my friends are ready to hit the dance floor."
"Nice meeting you too." Troy reached into his pocket and handed me his card. "Give me a call if you'd like to do something fun before I leave."
"Great. I will."
And so I would...stay tuned.
~~~~~~~~~~~~~~~~~~~~~~~~~~~~~~~~~~~~~~~~~~~~~~~~~~~
*No offense to anyone. There's nothing wrong with being gay, straight, asexual or into sheep. Well, nix the last one. That's just wrong. As far as alcoholism, don't drink and drive, don't hurt anyone, and tell me what you think about the rum-diet coke combination.