Dear Sillies,
It's time to say what we say every year: "I can't believe the holidays are here already!" Note: I'm not adding the traditional profanity - this is a family establishment.
I am, however, adding a very sweet dose of inspiration. 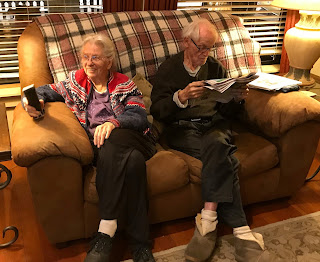 Meet Joe and Jenny. Ssh, they don't know I'm posting this. Neither does my friend, Keith, who took the photo.  But it's worth it. They're a remarkable hearty dose of wit, smarts, love, and pure inspiration. He's 94, and she's 90. (I've teased him about robbing the cradle.) Joe and Jenny hailed from Paradise. He drove them to countless gatherings in Chico, and I had the good fortune of meeting them years ago.
I was relieved to learn that they'd made it out of the fires in relative ease, and were staying with another extremely kindhearted couple in Chico. So I paid a visit with a small selection of cozies (blanket, socks...)
Jenny greeted me at the door. "Oh, you didn't have to," she said, donning her typical shy and warm smile.
Joe approached with the most firm and earnest hug I've ever received - actually, equal in strength to all the other hugs he'd given me.
"Well, where's your guitar?" he joked. (I don't play guitar, but nearly all of our mutual musical friends do.)

As you can see from the photo, Joe loves to read. I'd brought him some books that I had, but that are way beyond my level of comprehension. He said he lost 80 books to the Fire.
Joe had supported my book launch for Woman on the Verge of Paradise, bought, and speedily read the book. He's since attempted to elicit dirt on my (non) sex life every time I'd see him.
"So, you getting any action these days, Robyn?"
"Probably a lot less than you, my friend. I can't find a man, Joe. Much less keep one."
"Lemme tell you the secret to keeping a marriage going. There are two things you gotta do. One, don't get divorced. Two, don't die. I'm doing pretty good at both so far."
"You're doing amazingly well at both!"

It's impossible to have known this couple and to NOT believe in "true love." They are just that.

Regarding the Camp Fire, Joe says they'd been through it before. Paradise has had a number of evacuations in the past -- never, of course, anything like the terrors of 11/8. "If I'd have waited 15 minutes longer, we wouldn't have made it. We're much luckier than most."

I only wanted to tell them how important, and how inspiring, they've been to the entire community. What came out was "I love you, Joe. I love you both."
"Oh, all the women tell me that."

Joe and Jenny are missed, but for good reason. They've relocated outside of the area to live with family. I'm hopeful they have a sense of what they've meant to Chico and Paradise. They've forever changed us in the most beautiful of ways. True heroes, this couple. May they be safe and loved for years to come.