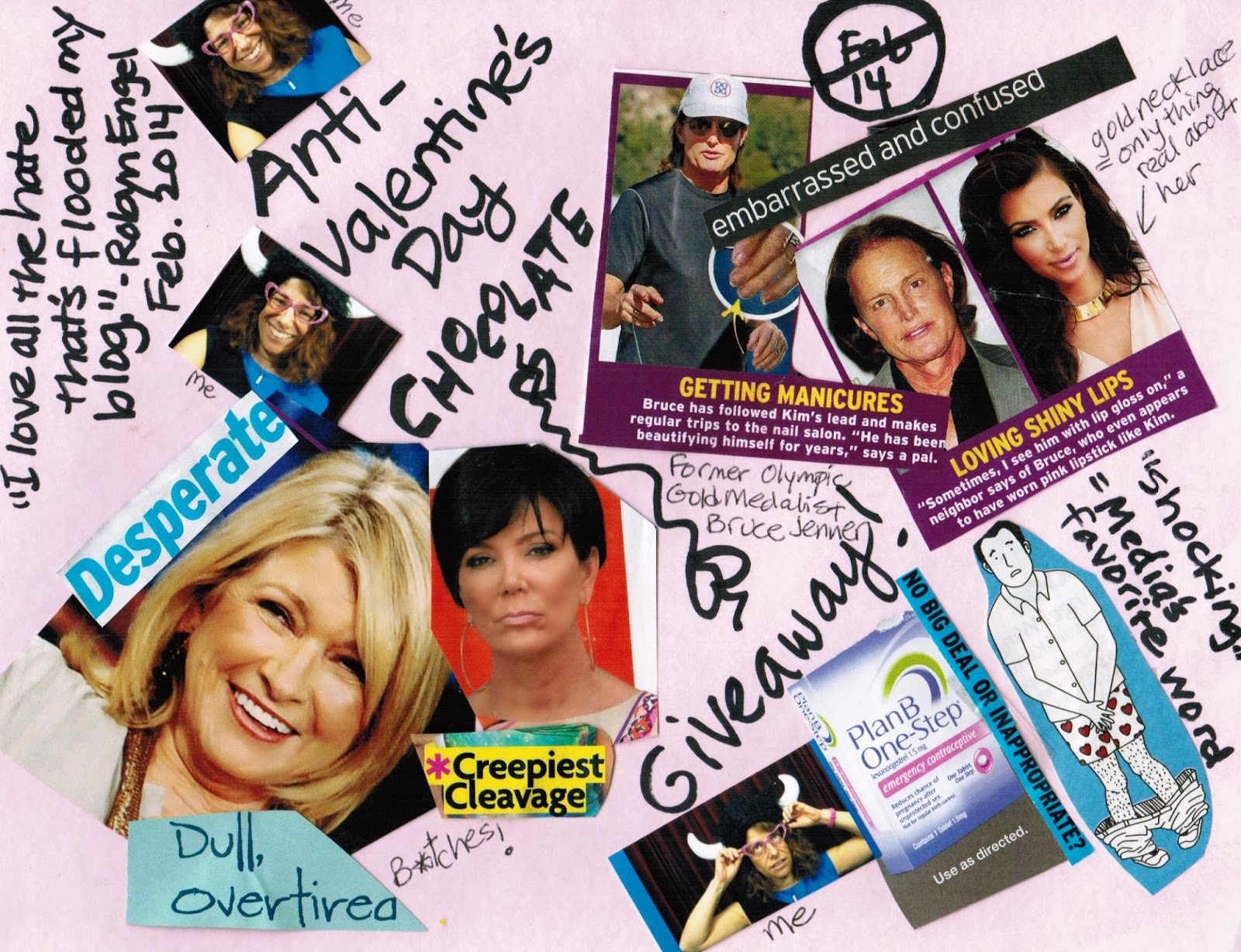 Exercise your right to vote! Vote on your favorite anti-Valentine's Day slogan (20 words or less). The winner will be gifted with delectable, high quality, fair trade chocolate!

1. Al Penwasser said...Valentines Day?
Oh ain't that just ducky?
If things go my way
I just might get lucky.

Lady Lilith said…How about a picnic in the park. With all this snow it is sure to be fun.


Roland D. Yeomans said...Nothing says YOU'RE SPECIAL like a mass-produced sentiment written by someone else!


Robin said…Take a stand against Valentine's Day. Chocolate should be given frequently and often. For instance, all days ending in "y."

L. Diane Wolfe said...Nothing says love like a dozen over-prices flowers that are just going to die in two days.

2. Al Penwasser said...This really is fun....
It's Valentines! I will...
buy some chocolates, buy some flowers
and a little blue pill
to give me four hours.

Kim Van Sickler said...Beep beep beep–beep beep
Oxygen mask yanked off again
Mom’s not loving me
As I place it back on.

Fanny Barnes Thornton said...A Valentine -just my luck!
I wanted a heart, but I got a duck!

Empty Nest Insider said...Another Valentines's Day,
Cupid is stupid,
My boyfriend is gay.
I went to bed a brunette,
And woke up gray.

3. Al Penwasser said...Roses are red
Violets are blue
Chocolate makes you fat
I'll eat the chocolate
and you can have the flowers.

HermanTurnip said..."I bought you this card because I can't read my own writing. Happy Valentines Day!"


David Oliver said..For Valentine's Day to be really sweet,
Two requirements you must meet.
Chocolate and a lady friend,
Damn! I have no lady, where to begin?

JoJo said...Valentines Day: Just another holiday that guilt trips men into buying crap for women who probably don't deserve it.

Daisy said...Chocolate hearts
make Valentine's Day fun,
but if you're alone,
all you REALLY want
is the day
over and done.

Vanessa Morgan said...Would you mind if I spend Valentine's Day with my cat?


A Beer For The Shower said...Buy some stale, dollar store chocolates, some flowers that’ll be dead tomorrow, and be sad and fat and alone... together.


Christian at Point Counter-Point Point Point said...20 word max?!?!?! This is the Russian's fault isn't it? Anyways I tried to edit mine down to 20 but couldn't do it. The best I could do is 42:
Instead of telling you how special you are in my own words, I found a greeting card while at the grocery store buying ham. Luckily they describe exactly how I feel about you, and I got a great price on the ham.
If you round down that could be 20.

klahanie said...Anti-Valentine's Day. Such a day. Romance at play. I don't really care. It's only fair. My fake smile, sunny. Just give me your money.


Pat Hatt said...Chocolate, flowers and stuffed bears, oh my! One makes you fat, one wilts on your mat and the other is covered in rat scat.